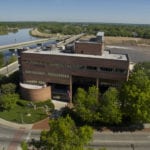 Utility rate hikes proposed for 2020 would increase the average Lawrence household’s bill to about $103 per month, and some city leaders are asking whether such a steep increase is actually necessary.

“I don’t have a position on it yet,” Larsen said. “I’m waiting to hear how this aligns with our plan that we had put in place a couple years ago for utility rate increases. The idea back then was to increase it a little bit each year in order to prevent these big jumps every so many years.”

If the recommended rate increases are adopted, the average Lawrence utility customer using 4,000 gallons of water per month would pay significantly more than they did five years ago. In 2015, a city utility bill for the average household was about $77 per month, according to past budget reports. The proposed utility rate increases for 2020 would bring the typical bill to about $103 per month, which equates to a 33% increase since 2015.

Finance Director Jeremy Willmoth previously told the Journal-World that the largest drivers of the utility rate increases are utility maintenance and improvement projects included in the city’s capital improvement plan. However, he said another change in Markus’ recommended budget is also contributing to the rate increase — a measure that would require some city departments to contribute more of their own funds to the city’s general overhead costs, such as human resources, IT and finance administration.

Larsen said she thinks the proposed changes to how overhead costs are handled are appropriate, as different city departments haven’t always been charged equitably for those costs. Still, Larsen said that any significant increase in utility rates is a cause for concern and the commission needs to make sure it understands the reasons for the proposed increases before any decisions are made.

Vice Mayor Jennifer Ananda agreed. Ananda said any kind of increase in the financial burden of Lawrence residents has to be looked at critically and a lot of questions have to be asked. She said she wants to discuss whether the increases are necessary, whether there are alternatives, and what will prevent additional large costs to the city in the future.

Commissioner Matthew Herbert also had concerns about the recommended utility rate increases, and said that he’s gotten a lot of calls from residents since the recommended budget was released Thursday evening. Herbert said he also wants to hear from city staff regarding whether the proposed increases are in line with previous rate model projections or whether something has changed. He said he expects that will be a big conversation.

“I do want to know if we have new information that has changed our approach, what exactly that is,” Herbert said. “That’s certainly something that I’m not willing to adopt without a conversation.”

City budget staff did not immediately respond to an email from the Journal-World Friday afternoon regarding whether the proposed utility rate increases are based on previously discussed rate models.

Larsen, Ananda and Herbert also agreed that property tax and utility rates should be part of the city’s conversation regarding affordable housing. Last year, the city hired BBC Research & Consulting to complete a housing market analysis. The study found that about 5,300 Lawrence renters were cost-burdened, defined as those who spend more than 30% of their income on rent and utilities. The study also found that about 2,300 renters earning between about $35,000 and $75,000 would like to purchase a home, but few affordable homes are available.

The city has an Affordable Housing Advisory Board and new sales tax that generates funding for affordable housing, but Herbert said he thinks the city has limited its definition of affordable housing. He said the city needs a more balanced approach that also considers property tax and utility rates.

“We have spent so much time in the last four years focusing on putting people into homes they can afford,” Herbert said. “And we have spent, frankly, no time, in my opinion, talking about what are we doing to make sure people that are in homes can afford to stay in them.”

“I think that those are the people who are most impacted by these changes and if we’re not looking at those changes from their perspective then we’re not being inclusive of the real impact that this has,” Ananda said.

The recommended operating budget totals about $236 million. In addition to the proposed utility rate increases, the recommended budget calls for a 0.5-mill property tax hike that will help fund, among other things, the first across-the-board wage increase that most city employees have seen in years. The proposed mill levy increase would amount to about a $12 increase in annual property taxes on a $200,000 home.