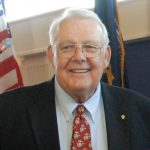 Former Lawrence City Commissioner Erv Hodges is pictured in a file photo from November 2007 at the Dole Institute of Politics on the campus of the University of Kansas.

One testament to the efforts of former Mayor Ervin “Erv” Hodges stands for all to see outside the Lawrence Visitor Center.

The 19-foot sculpture “From the Ashes” depicts a half-man, half-phoenix rising from flames and serves as a memorial for more than 400 Douglas County soldiers, sailors, Marines, police officers and firefighters who died in the line of duty, going back to the Civil War, the Journal-World reported at the time of the 2004 dedication. Hodges, a former Marine, and other Lawrence residents spent four years raising the money needed for the memorial. 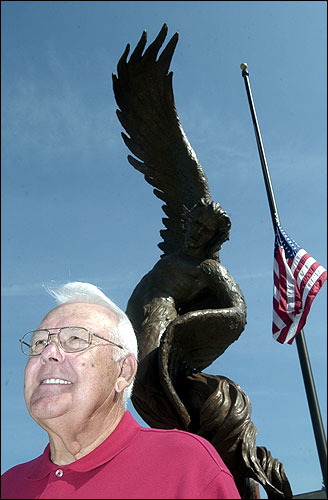 Erv Hodges is pictured at the Douglas County Memorial of Honor at the Lawrence Visitor Center, 402 N. Second St., in this photo from 2004.

Bonnie Lowe, president & CEO of the Lawrence chamber of commerce, served with Hodges on the Lawrence City Commission. Lowe said the effort to create the memorial exemplified a lot about Hodges, whom she described as a patriotic man with strong convictions.

“Raising the funds, the leadership, and seeing that to fruition was just part of who Erv was,” Lowe said. “He didn’t give up; he was a fighter.”

Hodges, 89, died Saturday. Following his career in the military, Hodges worked several positions at City Hall before being elected to serve on the Lawrence City Commission.

Hodges joined the U.S. Marine Corps in 1948 and had a 23-year military career, according to his obituary. Following his retirement from the Marine Corps as a lieutenant colonel, he worked for the City of Lawrence as director of personnel, assistant director of finance and director of utilities. In 1997, he was elected to the Lawrence City Commission and served as mayor in 2000.

Another former Marine, Marty Kennedy, was also elected to the City Commission in 1997. Kennedy described Hodges as a “great Marine,” and said that he and Hodges both donated some of their campaign money toward the memorial to make sure it could be built.

Kennedy said that he and Hodges clicked on the commission, and that he looked up to and respected him.

“We ran against each other in our first meeting on the City Commission, and we both were elected to the offices,” Kennedy said. “And we had a very good time working together for the good of the community.”

Kennedy said that during Hodges’ time on the commission, the governing body helped oversee various projects, including the initiation of the public bus service, the Indoor Aquatic Center and the new Lawrence Arts Center.

Lowe said it was fitting that Hodges’ time on the commission included such a variety of projects. She said Hodges was not agenda driven, and that he was equally interested in all areas of the city and all residents, from the youth to the retired generation.

“He represented all citizens in a very fair way, in my opinion,” Lowe said.

Hodges, who was born in rural Lawrence, graduated from Liberty Memorial High School and attended the University of Kansas, according to his obituary. In addition to his service in city government, Hodges was active in various local organizations, including Bert Nash Community Mental Health Center, Sertoma and Meals on Wheels. He was a 50-year member of the American Legion.

Hodges’ military career included service as commander of the U. S. Marine Guard at the American Embassy in Paris and as commander of the helicopter support company in Marine Corps Test Unit #1, according to his obituary. Hodges also served with a Navy staff during two tours in the Mediterranean and Caribbean. During the Vietnam War, he served with Headquarters III Marine Amphibious Force from 1967 to 1968 and was awarded the Bronze Star medal with combat V for his service.

Hodges is survived by his wife of 68 years, Shirley, son Mark Hodges, daughter Cynthia Fritzel, five grandchildren and 10 great-grandchildren. A memorial service for Hodges will be at 11 a.m. Saturday at Trinity Lutheran Church.