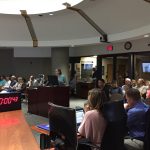 Several residents from northwest Lawrence, where the city's sidewalk maintenance program has been initiated, voiced concerns about the program and asked that it be halted at the City Commission's meeting Tuesday.

Several Lawrence residents voiced their objections Tuesday to a city policy that requires property owners to pay for repairs to sidewalks adjacent to their properties.

As part of its meeting Tuesday, the Lawrence City Commission received an update from city staff about the implementation of the sidewalk maintenance policy adopted last year. The policy requires property owners to fix sidewalks that run adjacent to their homes or businesses that the city deems hazardous. Several residents from northwest Lawrence, where the program has been initiated, have voiced concerns and asked that the program be halted.

About a dozen commenters told the commission that sidewalks are public infrastructure and should be the city’s responsibility. Northwest Lawrence resident Joe Herynk said the policy was not fair to property owners.

“My neighborhood is not asking for any special privilege; we’re asking for a fair program,” Herynk said. “And I believe what we have here in front of us is not fair.”

This spring, 243 northwest Lawrence property owners got letters from the city telling them to fix their sidewalks or else have them condemned and fixed by the city at their expense. Property owners can use the city’s contractor, which is replacing sidewalks for $175 to $200 for a 5-by-5-foot panel, meaning that property owners who must replace an entire sidewalk could end paying more than $1,000.

A group of residents is asking the city to halt the program to consider several issues. They would like the city to redefine what constitutes a sidewalk hazard; prioritize zones for repair based on severity of the hazards; and allow the contractor to repair residential sidewalks by grinding and patching instead of completely replacing sidewalk panels. In addition, they’re proposing that the city use money it has budgeted for sidewalk repairs to fund annual sidewalk initiatives each year.

The city has had an ordinance on the books for decades stating that property owners are responsible for sidewalk repairs, but until this year it was only lightly enforced, and the city says there are now millions of dollars of repairs that need to be made.

The city does set aside financial assistance for low-income residents and people on corner lots who have more than one sidewalk along their property.

Commissioner Stuart Boley said the sidewalk repair problems in Lawrence were a complex issue and that the conversation had gone on for a long time. He said the city’s new policy was an attempt to make progress on the problem and he thought it was a step in the right direction.

“My concern is, the program that we had before failed, so we need to come up with a program that works and is more responsive,” Boley said.

However, Boley, Mayor Lisa Larsen and Commissioner Matthew Herbert all said they had concerns about how the program was implemented, especially that for a time, the contractor the city had hired to do the repair work had invoiced or suggested some additional repairs on some properties. At the meeting, some residents voiced concerns that the practice was a conflict of interest. Public Works Director Chuck Soules told the commission that the city was responsible for determining when repairs were needed, not the contractor, and that process would not recur.

City staff said improvements to the program would be discussed, including creating an appeal process, creating a simple process for allowing residents to opt into using the city contractor, and more clearly defining what defects require repairs. Further discussion of changes will occur at a future meeting.

Two commissioners voiced more fundamental concerns about the policy and indicated they were interested in considering more significant changes. Commissioner Leslie Soden said that she believed all sidewalk repairs should be paid for by the city. Vice Mayor Jennifer Ananda said that she has voiced support before for city funding of sidewalk maintenance, but that she thought it was important to consider how much progress could be made if the city were to fund such a program.

“If we are allocating funds annually, what does that look like if we were to actually allocate that to sidewalk repairs in the most-affected (areas), and how long would that be?” Ananda said. “It could be 40 years, and that’s something to consider and look at.”