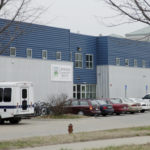 City leaders will soon consider whether to provide the local homeless shelter an additional $252,000 to help the shelter meet shortfalls in its budget.

As part of its meeting Tuesday, the Lawrence City Commission will consider the Lawrence Community Shelter’s additional funding request and receive an outside review of the shelter’s financial situation. The shelter is requesting an additional $252,000 from the city and $148,000 from Douglas County for 2019, which if approved would bring the city and county funding for the shelter to $715,000 for the year, according to a city staff memo to the commission.

City staff is seeking direction from the commission regarding the funding request, which would take money from the city’s general operating fund and require an amendment to the 2019 budget previously approved by the commission. All amendments to the budget will be discussed as part of the 2020 budget process later this month, according to the memo.

The shelter has struggled with its finances in recent years, and after facing a budget shortfall in early 2019, the commission voted in February to provide the shelter the entirety of its $200,000 of funding for 2019 at once. Commissioners also agreed in February that the city would pay up to $15,150 for a consulting firm, SS&C Solutions, to assess the shelter’s operations and finances, develop a strategic plan and provide search services for the shelter’s new executive director. The Douglas County Commission also voted to provide up to $15,150 for the assessment.

Leadership at the shelter has also been unstable. In December, the shelter’s fourth executive director since May 2014 announced her plans to resign and a search for her replacement is ongoing. In addition, the shelter’s interim director, Charles Frager, will soon be resigning and moving out of state, the Journal-World recently reported.

SS&C has completed phase one and two of the report and will present those findings to the commission Tuesday, according to the memo. Findings include that over the past five years, the shelter’s overall expenses have increased by about 19%, from about $968,000 to about $1.15 million. The largest growth in expenses were employee benefits and occupancy costs, which include equipment purchases, service fees, utilities, and repairs and maintenance. SS&C also reports that during that time the percentage of the shelter’s funding from private contributions decreased while funding from the city and county increased, from about 34% in 2014 to about 57% in 2019.

How the funding from both local governments is split up will also likely be a point of discussion at Tuesday’s meeting. City staff note that the additional funding request calls for more money from the city than from the county. Specifically, the memo states that the additional funding requests assume a cost-share of 63% city and 37% county, but that such a breakdown is not an “agreed upon cost-share allocation.” For instance, in 2018, the cost-share was 52% city and 48% county.

SS&C’s assessment also includes multiple recommendations, including narrowing the shelter’s mission to focus exclusively on emergency shelter, adopting metrics for its programming and separating board and staff roles, among others. The consultant continues to work on developing a partnership framework and a strategic plan for the shelter, the final draft of which will be delivered at a later date, according to the memo.

As the Journal-World reported, the shelter asked the county in May for $148,000 in additional funding for this year. Interim County Administrator Sarah Plinsky said that prior to the county formally considering the shelter’s request at either its June 5 or June 12 meeting, she and commissioners would like to see a sketch of a long-term revenue strategy and capital plan, as well as refined outcomes and data.