Affordable Housing Advisory Board to consider 6 projects for funding 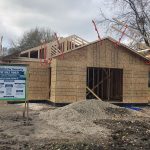 The construction of a Lawrence Habitat for Humanity home in North Lawrence is pictured Oct. 26, 2018.

Affordable housing projects and programs requesting support from the city include a development of small homes, apartments for seniors, and a mixed-use complex with units for low-income renters.

The city’s Affordable Housing Advisory Board has received funding applications from six projects, and following an upcoming evaluation, it will provide its funding recommendation to the Lawrence City Commission.

Lawrence voters approved a sales tax in 2017 that will provide about $1 million annually to the city’s affordable housing fund for the next 10 years. The city also previously allocated $350,000 of general funding toward affordable housing for this year, and Assistant City Manager Diane Stoddard said the board will be awarding $250,000 of that funding as part of this round. She said proceeds from the city’s newly enacted affordable housing sales tax fund only started coming in this month, and the board plans to have a second round later this year to award a larger amount of money.

Summaries of the six affordable housing projects are as follows. Each project’s full funding application is available on the city’s website, lawrenceks.org.

• Tenants to Homeowners, Inc. is requesting $150,000 toward the construction of seven affordable small homes. The homes are part of a new small home development near Bullene Avenue and 19th Street, and they will be sold to income-eligible households at $50,000 below market value. The two- and three-bedroom homes will be priced between $100,000 and $125,000 and have energy-efficient all-electric construction to provide low utility costs.

• Wheatland Investments Group is requesting up to $250,000 toward the construction of 42 one- and two-bedroom affordable apartments. The units will be leased to people age 55 and older who make 50-60% of area median income. The project will be phase two of an existing development, Bethel Estates, located at the intersection of O’Connell Road and 25th Terrace.

• Ohio Mortgage Investors LLC is requesting $600,000 to be allocated incrementally over the next two funding cycles. The funding would go toward the construction of the Penn Street Lofts affordable housing project in the arts district in East Lawrence. The project is a three-story mixed-use building at 800 Pennsylvania St. that would include 48 affordable rental units, comprising studio and one- and two-bedroom apartments. The units will be available to tenants earning 30-60% of area median income.

• Lawrence Habitat for Humanity is requesting $50,000 toward the provision of two affordable homes, which together have a total construction cost of approximately $320,000. The project would build one new home and renovate a second home purchased in foreclosure. The homes will be sold to families with incomes at or below 60% of area median income.

• Independence Inc. is requesting $50,000 to expand the organization’s existing program that helps pay for accessibility modifications to the homes of people with disabilities. Applicants’ total household income cannot exceed 80% of area median income.

• Lawrence-Douglas County Housing Authority/Family Promise of Lawrence are requesting $100,000 toward the New Horizons Transition Housing Program. The housing authority would use $50,000 to pay for rental assistance and utility deposits, and Family Promise would use $50,000 to support a case manager to provide supportive services to families in the program or who are living at the homeless shelter.

Stoddard said the board is using a new evaluation process following a request from the commission to improve its format. Earlier this year, the commission requested that the board’s method for evaluating proposed affordable housing projects be further refined, and the board subsequently refined the criteria for funding proposals and the scoring matrix that the board uses to evaluate them.

As part of the new process, Stoddard said each member of the board will evaluate the proposals individually and using the matrix and provide each project a score. Board members will bring those scores to the board’s meeting Monday, and those score sheets will inform further discussion among the board, which will likely finalize its recommendation that day. The recommendation would then be sent on July 16 to the City Commission, which will make the ultimate decision.