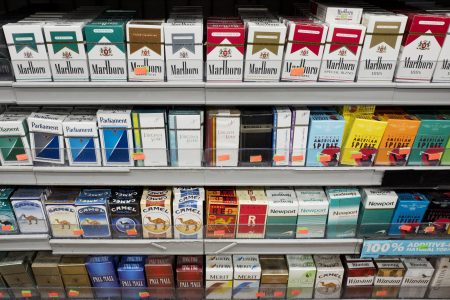 This Aug. 28, 2017 file photo shows cigarettes displayed on a store shelf in New York. With a new law enacted in December 2019, anyone under 21 can no longer legally buy cigarettes, cigars or any other tobacco products in the U.S. It also applies to electronic cigarettes and vaping products that heat a liquid containing nicotine. (AP Photo/Mark Lennihan, File)

Local anti-tobacco advocates say recently approved federal legislation raising the age to buy tobacco products is a critical step, but more can be done locally to discourage youth use.

As part of its federal spending package, Congress recently approved regulations increasing the federal age to buy tobacco products, including e-cigarettes, from 18 to 21. The Lawrence-Douglas County Health Department and LiveWell Douglas County have advocated for local ordinances to raise the age to purchase tobacco, and health department officials praised the change.

“We’re really excited that this happened at the federal level,” said community health planner Sarah Hartsig. “It’s something that is a critical first step in addressing the epidemic of youth that are vaping that has been particularly concerning for us here locally, as well as nationally.”

The new tobacco regulations were part of a wide-ranging $1.4 trillion spending bill signed by President Donald Trump earlier this month. The U.S Food and Drug Administration recently added language to its website indicating the new age limits are effective immediately, although it also couched the update with a promise to “provide additional details on this issue as they become available.”

The number of teenagers vaping has been on the rise nationwide, and members of the Lawrence school board have said that vaping is epidemic among teens in the school district. The health department and LiveWell leaders have said that increasing the age to purchase tobacco is key because older teens often provide tobacco products to younger ones. The health department also notes that data shows that 90% of lifelong tobacco users start using tobacco before age 21.

However, Hartsig said the health department still would like to see further action at the local level, including tougher enforcement of the age restrictions and bans on flavored tobacco and e-cigarette products.

“While it is a significant achievement and it’s something we should celebrate, the fact that it’s happened shouldn’t give us an excuse to sit back and wipe our hands and say the work is done,” Hartsig said.

Currently, tobacco laws are enforced by state of Kansas agencies, but some communities have elected to put a city department or the local health department in charge of compliance and enforcement. Hartsig said currently the state only conducts annual compliance checks on a portion of stores that sell tobacco products, and that moving enforcement to the local level could ensure all stores have compliance checks. She said local license fees would cover the enforcement costs and that handling it locally could allow the city to follow best practices of punishing only noncompliant businesses as opposed to also punishing individual clerks.

Mayor Jennifer Ananda has previously opposed raising the tobacco purchase age due in part to concerns about individual clerks, who are usually young people themselves, being punished for noncompliance, as the Journal-World previously reported. Ananda has also said efforts should focus on prevention rather than intervention.

There is already a federal ban on flavored cigarettes, and some cities have extended that ban to cover other tobacco products and e-cigarettes in an effort to decrease the appeal of those products. Hartsig said the flavors make the products more enticing for youth. For those youth who are already addicted, Hartsig said the health department will continue working with the school district to make sure students are educated about the harms of nicotine use and vaping and providing them with resources for quitting.

According to national media reports, other public health advocates have expressed similar notes of caution following the federal changes. They’ve noted that raising the tobacco age to 21 was the policy that some in the tobacco industry preferred and that its approval at the federal level does not mean that other efforts should cease. In addition to ensuring strict enforcement and enacting flavor bans, some health advocates have also suggested higher taxes on tobacco products.

The recently seated Lawrence City Commission has indicated it is interested in taking local action to discourage youth tobacco and e-cigarette use.

One of the first actions by the new City Commission, whose two new members, Brad Finkeldei and Courtney Shipley, were sworn in Dec. 3, was to take up the local proposal to ban the sale of tobacco and vaping products to people under 21. The commission directed city staff to put the topic on a future agenda. That action was taken before the federal regulation was passed last week, and the commission has not met since then.