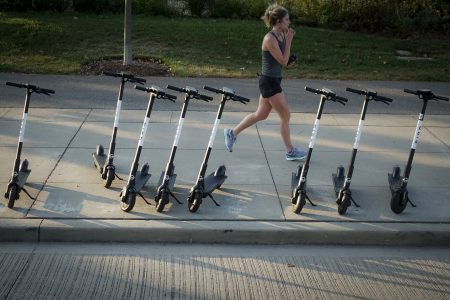 “If you’re on a scooter, there is a lot of potential for damage: shop windows, planters, light posts, parked cars,” Downtown Lawrence Inc. executive director Sally Zogry said. “Then for the safety of the scooter rider — if they were to be in the street, on Mass. Street with the angled parking, it’s so dangerous. It would be very hard to see them.”

Zogry said that outdoor dining areas and city landscaping planters create narrow areas on downtown sidewalks and that the speed of the scooters and heavy foot traffic are not a good mix. She said riding scooters down the street itself was no better because the roadway was lined on both sides with parking.

But there’s a real possibility that the scooter rental services will come to Lawrence and potentially to the downtown area. In response to requests from two electric scooter rental companies, the Lawrence City Commission voted unanimously to issue a request for qualifications (RFQ) for an electric scooter pilot program. Once responses to the RFQ are received, the commission will decide whether and how to move forward.

The RFQ calls for a maximum scooter speed of 15 mph. Scooters would have to have front and rear lights, and they would have to be powered by batteries that could be swapped out, not a system that would plug into electrical outlets to charge. The scooter service would have to be able to remotely lock down the scooters outside of established operating times, and it would have to support geo-fencing technology, which could limit the scooters’ speeds and cause them to stop working entirely if they’re in places where they’re not supposed to be.

The scooter companies would also be required to provide 24/7 customer service; create a plan for operations and parking in the downtown and KU campus; and reimburse expenses for staff time and equipment to remove scooters in prohibited areas, among other requirements.

Under the pilot program, 500 scooters would be deployed in Lawrence for six months, according to a city staff memo to the commission. Local laws for scooter use, such as whether the scooters will be allowed on sidewalks, streets or both, have not yet been finalized, but city engineers have shared some initial details of what they plan to recommend. The commission would ultimately determine those details as part of a city ordinance before moving forward with the pilot program.

One of the key questions that city leaders will need to consider is how they intend the scooters to be used. Some proponents of scooters say they provide connectivity to public transportation — what’s referred to as the first and last mile of the commute.

Vice Mayor Brad Finkeldei said he was interested in bringing scooters to Lawrence only if the pilot program showed that they were indeed a useful alternative mode of transportation.

“In particular, like was mentioned, the first mile/last mile to help get people to our bus stops, for example, or get them to places where they can then go on to employment opportunities,” Finkeldei said. “I am not interested, really, in them being an entertainment sort of activity in downtown Lawrence.”

Like Finkeldei, Commissioner Courtney Shipley said she thought scooters could be a good mode of transportation, especially when it came to helping people get to bus stops or destinations such as downtown or the University of Kansas campus. Shipley also expressed interest in recreational uses for the scooters, but said that addressing the safety concerns would be key.

“I feel like I’m going to have high expectations of the discussion of the ordinance, because I think those will address the safety concerns that people have,” Shipley said.

Where should scooters be allowed?

In response to questions from the commission at its most recent meeting, City Engineer Dave Cronin said staff was recommending that scooters generally be treated like bicycles. Cronin said that would mean scooters would be allowed on both streets and sidewalks, with the exception of downtown sidewalks, and would need to yield to pedestrians just as bicycles are required to do.

Zogry, who noted the city has been responsive to the concerns of Downtown Lawrence Inc. members throughout the process so far, said that bans from downtown sidewalks would need to be enforced because people regularly ignore signs that ban bicycles and skateboards. She said the city should either ban scooters outright on Massachusetts Street or restrict the scooters to certain days of the week, times of day and speeds.

“There are enough perceived obstacles for the public to come downtown and spend their time strolling, shopping, dining, going to see plays, live music, galleries, what have you,” Zogry said. “You’ve already got bicycles and you’ve already got skateboards, and then if you add scooters and you take up parking, it’s just yet another reason for some people not to come down here.”

Student leadership at the University of Kansas, meanwhile, has pushed for scooters. According to KU student newspaper The University Daily Kansan, student body president Tiara Floyd was elected on a platform that included bringing scooters to campus. Floyd says scooters could benefit students who can’t afford their own vehicles or a KU parking pass, the Daily Kansan reported in August.

Finkeldei said he’s noticed students’ efforts to bring scooters to campus and that he’s interested to see how a service would work at KU. He also said he’s interested in using geo-fencing technology to limit where scooters can be used — including banning them from downtown.

“I don’t necessarily mind if it’s a way to get a student or somebody from a neighborhood or the campus close to downtown, but then they’d walk thereafter,” Finkeldei said. “Maybe we can get them to a parking lot, a designated area. I’m not as interested in having them be an entertainment, of people just buzzing up and down Mass. Street.”

Finkeldei went on to say that he hoped the pilot program could be used to test scooters out in different locations and with different speed restrictions to help inform the commission’s ultimate decision.

Shipley said that the city should either ban scooters from Massachusetts Street — both the sidewalks and the street itself — or at least significantly limit the speed at which scooters can travel in downtown. She said an outright ban for downtown could be a good idea for the pilot, because it would allow the city to see whether that is too restrictive.

“That will give us feedback,” Shipley said. “If people say, ‘That’s too restrictive, we’re not going to use it,’ then we’ll have gotten that feedback too.”

If commissioners decide to conduct a pilot program, additional steps will follow. The commission would select up to two companies to participate in the pilot program, according to the memo. In addition to an ordinance to define local laws for scooter use, the operational requirements for the participating scooter companies would be detailed in a right-of-way license agreement with the city.

The city began discussing the possibility of allowing scooters in Lawrence in response to requests from two companies, VeoRide and Bird. In August the Multi-Modal Transportation Commission voted to create a subcommittee to develop the pilot program. One of the subcommittee’s main concerns was safety, and the memo states that city staff used input from the subcommittee as well as input from Downtown Lawrence Inc. members to outline requirements and expectations for the proposed RFQ.

The proposed schedule for a pilot program would be from April 1 to Oct. 1, 2020.