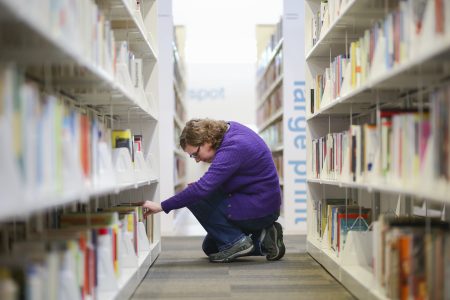 In this file photo from July 12, 2017, Melissa Fisher Isaacs, information services coordinator at the Lawrence Public Library, works to ensure that books are properly located within the shelves at the library.

The Lawrence Public Library board voted to eliminate fines for overdue books and other media beginning next year, but not before hearing concerns from some residents.

As part of its meeting Tuesday, the library Board of Trustees voted unanimously to eliminate late fines from the library’s circulation policy. Library patrons would still be charged for lost or damaged items. Patrons would be blocked from checking out additional books and materials once an item became two weeks overdue, but return of the overdue item would immediately restore access.

Brad Allen, the library’s executive director, said he expects the fines will be eliminated beginning Jan. 1.

Lawrence resident Chris Burger, a former member of the library board, told board members he thought part of their role was to represent city taxpayers, whose property taxes support the library. The library has indicated it has room in its budget to cover the lost fine revenue, but Burger said that eliminating fines as a revenue source essentially shifts that financial responsibility to the taxpayer.

“As an entity, if you have more income than you think you need, the appropriate step in my book is you reduce your budget,” Burger said. “You don’t step away from a stream of income that exists.”

Burger, among other points, also said if the board is serious about eliminating overdue fines, it should pursue a change in city ordinance so the decision cannot be easily reversed in the future. Another Lawrence resident, Michael Austin, said he was concerned some library patrons would abuse the elimination of overdue fines, keeping books long periods of time and ultimately reducing access to those materials for everyone else.

Board member Brady Flannery said that the board has had a long discussion that took into account the points that Burger and Austin raised. He said that he was not going to fight to hold onto a practice that has not necessarily been proven effective and that he saw the shift as an opportunity.

“I do think it’s an opportunity to reach more customers, to reach them differently, to engage them more,” Flannery said.

Library staff recommended that the board eliminate overdue fines, and board member Joan Golden said that the board should trust the professionalism of the staffers who work with library patrons and watch national trends. Golden also said some of the concerns about patrons bringing back items resonated with her, and that she thought that blocking accounts with items more than two weeks overdue addressed that concern without being financially punitive.

“That instills a responsibility — that they have to respect the rules and they have to make sure the book is there for the next child,” Golden said.

Board Chair Judy Keller suggested that library staff bring a report back to the board once a year of data is available, so that the board could evaluate the outcome of eliminating fines. Other board members agreed, and that request was incorporated into the board’s motion.

Allen noted that eliminating overdue fines was in line with the stance of the American Library Association that library policies should not disadvantage low-income people. The ALA officially came out against charging fines earlier this year, citing concerns that fines create barriers to library materials and services, according to the association’s resolution on library fines. Allen also said he thought eliminating fines was in line with the city’s interest in socially equitable policies.

Currently, people who fail to return library materials on time are charged 15 cents per day with a maximum overdue charge of $4.50 per item, according to the circulation policy. Library card accounts are currently blocked from access when the balance reaches $10. In addition to the elimination of overdue fines, all currently accumulated overdue fines — which total about $300,000 — will be waived from all accounts, meaning that many accounts will come back into good standing.

The library has already arranged its 2020 budget to accommodate the loss of revenue from fines, which is about $115,000 annually, according to the library’s budget. Though the library’s mill levy rate did not increase for 2020, increasing property valuations mean all taxing entities will receive more money next year than they did this year, and Allen previously told the Journal-World that the library has allocated some of those additional dollars to make up for the lost fine revenue.