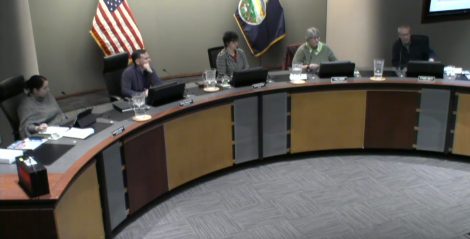 As part of its study session Tuesday, the Lawrence City Commission received a report from the area union Teamsters Local 696 regarding Resolution No. 6817, which the commission can amend at its discretion.

Matt Hall, secretary-treasurer and business agent for Teamsters Local 696, told the commission that there is a group of city employees interested in unionizing, but that the city’s resolution creates barriers to unionization and needs to be reformed.

“We are happy that the City of Lawrence has decided to adopt an ordinance to allow employees to have a seat at the table,” Hall said. “All we’re asking for today is to modernize this ordinance that’s already on the books, to give all employees a real chance to actually enjoy it and have the benefits of it.”

The resolution divides city employees into four groups that could potentially unionize. In addition to police and fire and medical workers, the other two employee groups that the resolution allows to unionize are “clerical, technical and administrative support personnel” and “service, maintenance and skilled labor.”

Hall said those divisions are problematic for organization purposes because it means employees who don’t interact and who have different jobs, working conditions and needs are lumped together. He said that sets an impossibly high standard, and the union proposed that the four groups of city employees be divided into 11 more specific groups instead.

Regarding voting, in order to be represented by a union, 50% of all the employees in any one of the four groups — not 50% of those employees who choose to vote — must agree to the union representation. Hall objected to that framework, saying that those who don’t vote are counted as “no” votes. The union is proposing that the requirement be 50% of the employees who do vote.

Commissioners indicated they were interested in discussing potential changes to the resolution. The commission asked city staff to research the consequences of the changes proposed by the union as well as several other topics and then bring the proposal back to the commission for discussion.

More specifically, the commission asked how additional employee unions could impact city staffing needs and whether the city would need additional employees to manage a new union should one form. Currently, the only two groups of city employees that are represented by unions are police officers and fire and medical employees. The most recent contract negotiation meetings between city and union representatives for those two groups took dozens of hours each.

City Manager Craig Owens noted that the time spent negotiating was substantial. He said that the city would need to make sure it had the capacity to undertake additional negotiations as well as to ensure that the agreements are being followed.

“That would be something we’d want to make sure we don’t shortchange,” Owens said.

The commission also asked city staff to come up with employee divisions that were more than the current four but less than the 11 groups proposed by the union and to indicate how many staff members each group would have. Commissioner Stuart Boley asked for the history of the city’s resolution, including background information regarding its origination. Boley also asked for the number of employee grievances filed by union and nonunion employees.

The union’s proposal and the staff report requested by the commission is expected to return to the commission for further discussion sometime in January.