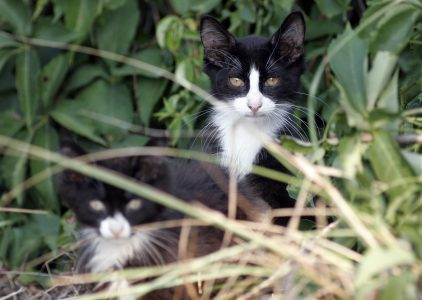 In this file photo from Aug. 3, 2007, feral cats gather for a meal provided by volunteers at Douglas Memorial Park in Cape May, N.J. (AP Photo/David Gard)

The Lawrence Humane Society has begun its new program to manage feral cat populations and is seeking volunteers to help with the effort.

The Community Cat Program uses the “trap-neuter-vaccinate-release,” or TNVR method, in which feral cats are caught, spayed or neutered, vaccinated, and then returned to the area where they were collected. Kirk Putman, the Humane Society’s interim director, said that the shelter conducted its first TNVR effort last Thursday and its second on Tuesday and has trapped 15 cats so far. He said the program would ramp up from here with the help of volunteers.

“The ‘community’ part of the Community Cat Program really is the key,” Putman said. “We are confident the program will be a tremendous success, but we can’t do this alone.”

Putman said the first effort trapped five cats in the area of 100 Arkansas Street and the second effort trapped 10 cats in the unincorporated areas of Douglas County near Lecompton. He said about 18 volunteers have helped with the program thus far, but that the shelter will continue to seek volunteers to help out in different areas and at different times of day.

Volunteers are needed for multiple tasks, including transporting cats to and from their colonies, power-washing cat traps after use, sewing trap covers and organizing special events, according to the shelter’s website. Volunteers also help educate the public about the program by canvassing neighborhoods with known feral cat colonies and talking with community members and caretakers of the cat colonies.

The shelter will cover the costs to neuter and vaccinate feral cats trapped by the shelter or shelter volunteers, Putman said. He said contributions from the community are essential to help the shelter pay for the surgeries, vaccinations and other medical treatments and care the cats will need. The shelter is accepting donations of money, which can be made online, as well as materials to support the program. Currently, the shelter’s primary material needs are traps and trap covers, but it is also in need of falcon gloves, bag nets, tarps and canned cat food, according to the website.

Members of the public who aren’t part of the volunteer effort can also use the program to neuter and vaccinate feral cats. With support or guidance from volunteers as needed, residents can use their own traps, or rent traps from the shelter, to catch the cats, according to the website. Feral cats brought to the shelter by the public will be neutered and vaccinated for a cost between $35 and $45, Putman said.

Until recently, city code did not allow for such a program because cats were not allowed to roam free, and would be trapped by animal control, brought to the shelter, and either adopted out or euthanized. The shelter proposed code changes last year to allow feral cats that have been neutered and vaccinated to roam, and those changes went into effect May 1. As part of the program, the shelter clips the ear of a feral cat when it is neutered and vaccinated, and that cat will no longer be picked up by animal control.

Some members of the public opposed the changes because they were concerned that allowing feral cat colonies would create a nuisance, threaten birds and other wildlife, and be inhumane for the cats themselves. However, the shelter maintained that feral cat colonies breed to fill the void of removed cats and that programs that neuter colonies ultimately reduce the populations over time.

Putman said shelter staff and volunteers receive training from the Topeka Community Cat Fix program. That program has trapped and released a total of 2,662 cats in four years as part of its TNVR program, according to the website.

Community Cat volunteers must be at least 18 to participate, unless an adult accompanies them. There are no minimum hours and volunteers do not need to be current shelter volunteers to help with the program. Those interested in volunteering can contact Community Programs Manager Alisa Farinelli at 371-0475 or afarinelli@lawrencehumane.org.