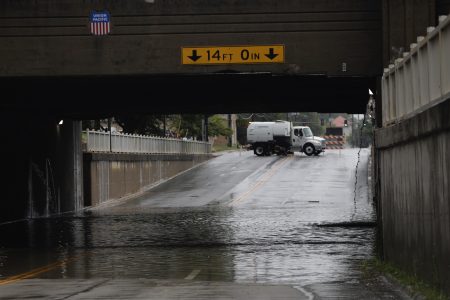 The underpass along North Second Street by the Union Pacific Depot in North Lawrence closed because of flooding on Thursday, Aug. 1, 2019.

For the fourth time in the past three months, heavy rain has caused the underpass leading to North Lawrence to flood, requiring traffic to be directed along a meandering route through the adjoining residential neighborhood.

Around 11 a.m. Monday, city crews closed the North Lawrence underpass, near the intersection of Locust and North Second streets, because of flooding and posted detour signs. It was about two hours before the roadway reopened. The underpass also flooded and forced detours in May, June and during another period of heavy rainfall earlier this month.

After North Lawrence Improvement Association President Ted Boyle recently voiced concerns about the frequent flooding of the underpass to the Lawrence City Commission, Mayor Lisa Larsen requested more information regarding the situation. The city subsequently provided information indicating that mechanical failures at one of its pump stations have played a role in the flooding.

In a memo provided to the commission Aug. 20, Municipal Services and Operations Assistant Director Charles Soules said that during a storm in June there was an electrical failure at North Lawrence Pump Station No. 2, which services the underpass. More specifically, the memo states that the electrical windings failed in one of the station’s two pumps and that a power surge could cause such a failure.

Since that time, the pump station has not been operating at full capacity. The city has had trouble repairing or replacing the broken pump, according to the memo.

The memo states that the pumps at North Lawrence Pump Station No. 2 are more than 20 years old and repair parts are not readily available, and that it has been a challenge to find a replacement pump that will fit the existing rails and base. The Municipal Services and Operations department is in the process of getting bids for the purchase of three new pumps — two replacement pumps and one backup — for the station and in the meantime has purchased a new temporary pump to get the station back to full capacity.

The city originally expected the temporary pump to be delivered sometime last week, but city spokesman Porter Arneill told the Journal-World Monday that another issue had arisen. Arneill said the temporary pump has not shipped yet because the company sending the pump has to specially make parts that enable the pump to fit in the existing rails and base. However, he said it’s thought that the new pump would ship this week and could be quickly installed once it arrived.

In response to the flooding, the city has been using a mobile diesel pump to clear water from the underpass and enable it to reopen, according to the memo.