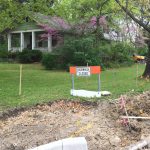 A property, pictured April 23, 2019, at the corner of 23rd and Vermont streets is the subject of an eminent domain dispute with the city.

The ongoing project to widen a portion of 23rd Street has the city at odds with a homeowner along the roadway.

The city is widening 23rd Street between Louisiana and Massachusetts streets to install a center turn lane, requiring the city to acquire easements from several property owners, including the owner of a home at 23rd and Vermont streets who has since filed a lawsuit against the city. The project required easements from 12 properties totaling about 7,500 square feet, and the disputed land is the only unresolved easement, according to a city memo.

City memos state that the property at 23rd and Vermont streets is not platted and therefore required an in-depth review of property records to determine the property’s lot lines. At the center of the dispute is whether the city right-of-way extends 30 or 33 feet from the center of the road, and the homeowner and the city both claim to have documents indicating different locations for the property line.

Depending on where the property line is, the city’s easement for the project would be either about 550 or 925 square feet, according to city records. The city and the property owner also disagree on the value of mature trees that would have to be removed for the project, with both issues amounting to a gap of several thousand dollars between what the city offered to pay the homeowner and what the homeowner felt the easement was worth.

City staff and the homeowner met and corresponded for months regarding the issue, according to correspondence related to the easements. Originally, the city offered the homeowner $5,300 for the easement. In order to compensate for the loss of mature trees, the city subsequently offered $17,500, which the homeowner did not agree to. Representatives for the homeowner asked to be compensated approximately $30,000 for the easement and the loss of trees and shrubbery. Then, upon further research, the city determined that the city’s right-of-way extended 33 feet from the center of the roadway as opposed to 30 feet, and decreased its offer for the utility and pedestrian easement to $1,900.

In addition to the widening of the roadway, the project calls for the replacement of waterlines and the installation of 7-foot-wide sidewalks along 23rd Street, which the city has stated cannot proceed along the frontage of the property at 23rd and Vermont streets without acquisition of the easement. After disputes could not be resolved regarding the location of the property line and fair compensation for the easement, the city began eminent domain proceedings in February against the homeowner to acquire a utility and pedestrian easement as well as a temporary construction easement to complete the project.

In response, the homeowner recently filed a lawsuit in Douglas County District Court against the city asking to halt work on the disputed land. In the lawsuit, filed April 11, the homeowner, Emma Barland, claims that the city does not own the additional three feet of land. The lawsuit asks the court to declare that Barland owns the disputed land and to issue a temporary restraining order, a preliminary injunction preserving the status quo, and a permanent injunction prohibiting the city from completing any work on that land.

“Allowing the City to use or go onto the Disputed Land, whether to complete the Project or for another purpose, would disturb the status quo and is likely to cause permanent harm to the Property,” the lawsuit states. The lawsuit requests that the city provide full and fair reimbursement and compensation to the homeowner and any further relief that the court deems just under the circumstances.

The city has not yet issued a response to the lawsuit and the city’s eminent domain proceedings remain pending in Douglas County District Court.

Judge Paula Martin ruled that the city’s taking of the easement by eminent domain is necessary and lawful and ordered three disinterested parties to appraise the value of the property that the city seeks to take through eminent domain and determine just compensation. The court-appointed appraisers filed their report April 12, based off the 33-foot measurement, stating that just compensation for the utility and pedestrian easement is $7,800. The city and Barland have 30 days after the filing of the report to appeal the valuation, according to a city memo regarding the process.

Attorneys for Barland and the city did not immediately respond Tuesday afternoon to a Journal-World request for further comment on the proceedings. The sidewalk previously located along the property has been removed and no work appeared to be occurring in that location Tuesday afternoon. Construction work on the 23rd Street project is ongoing.