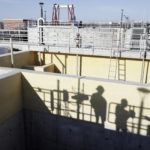 Some of the infrastructure at the Biological Nutrient Removal basin of the new Wakarusa Wastewater Treatment Plant, 2300 E 41st St., is pictured Tuesday, Feb. 13, 2018.

The city’s recently completed $74 million sewage treatment plant has clogged, requiring the city to haul sludge to another plant in order to temporarily clear the plant’s basins and make repairs. Though the plant is fully operational again, city staff says it’s continuing to investigate what caused the clog.

As part of its meeting Tuesday, the Lawrence City Commission received a report on a payment of $253,800 to Honeybee L.C. for emergency sludge hauling at the Wakarusa Wastewater Treatment Plant. The sludge hauling was necessary to clean out and repair the plant’s aerated sludge diffusers, according to a city staff memo to the commission.

The Wakarusa Wastewater Treatment Plant, which went online in early 2018, is one of the city’s biggest infrastructure projects in recent years. Commissioner Matthew Herbert, who pulled the item from the commission’s consent agenda, said he received a number of calls, emails and texts from residents about the issue once it was placed on the agenda and he thought it warranted a discussion.

Herbert said residents were concerned that such an expensive project was already having what appeared to be a “pretty massive failing.” He asked city staff if the clog was something the city can expect to happen again and whether the city could recoup any money through equipment warranties.

Treatment Divisions Manager Leah Morris said the issue was still being investigated but that the city hoped it would not recur. Morris said the city was investigating the diffusers themselves, the equipment that provides the air to the diffusers, and everything that filters solids out of the sludge. She said it’s not clear yet what caused the clog.

“At this point those diffusers have been used in multiple other cases and areas,” Morris said. “We are for some reason having this issue and we’re not really sure why yet. We’re working with the design consultant as well as the contractor and the providers of that equipment specifically to investigate why.”

Morris added that since clearing the basins of sludge and starting them back up, the diffusers have not clogged again. She said the city was closely monitoring all of the components of the process to come to a resolution.

Regarding the hauling costs, Morris said that typically the sludge could have been applied to agricultural land but that at the time of the clog — which occurred in January — that was not possible because of weather and issues with the equipment used to apply the sludge.

Municipal Services and Operations staff met with the contractors and designers of the plant, Garney Construction and Black & Veatch, in January to discuss the malfunction, according to the memo. Specifically, the plant’s course-bubble diffusers for the sludge aeration basins were no longer providing diffused oxygen. The memo states that it was determined that the equipment should remain on the project warranty list until the city completes its investigation of the issue.