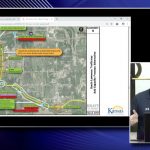 Though city leaders continue to stress the need to widen the South Lawrence Trafficway, state officials still have no answer as to when the project will be funded and able to move forward.

As part of the Lawrence City Commission’s meeting Tuesday, Kansas Department of Transportation representatives provided commissioners an update on the potential lane expansion of the western leg of the South Lawrence Trafficway and other options for improving travel on the roadway.

Commissioner Matthew Herbert said that though the completion of the trafficway has helped to reduce some traffic congestion on 23rd Street, the trafficway is not fully functional. He noted that at certain times of day, there is standstill traffic near the trafficway’s intersection with 27th Street and that the two-lane portion does not successfully move traffic.

“It is not working as a two-lane road the way it’s supposed to function as a trafficway around the city,” Herbert said.

KDOT began its three-year environmental impact study on the lane expansion project in September, and the project team is currently reviewing six initial options. Those include not adding lanes to the western leg of the trafficway but making other improvements; expanding the western leg to either four or six lanes; and turning the trafficway into a toll highway to fund the lane expansion, according to a memo to the commission from KDOT engineer Aaron Frits.

The city has long advocated that the state fund the expansion of the western leg of the trafficway, and the commission is officially against using tolls as a means to fund the expansion. That position was included in the city’s 2019 Legislative Priority Statement.

Frits emphasized to the commission that KDOT was not pushing to make the trafficway a toll road, and that if cities want that option they must ask for it. He said KDOT is just saying that tolls are one option and that it doesn’t want to exclude that funding mechanism from the study.

“KDOT is not asking to toll it; KDOT is just saying this is one option,” Frits said. “And if the cities want to come to us and toll that facility, then that ask is on them and we’re ready and willing to work with you.”

Commissioner Stuart Boley said he was concerned that charging a toll would mean motorists would use 23rd Street instead. He noted that since the trafficway was completed, 23rd Street has no longer been designated a state highway, so the city no longer receives state funding to maintain it.

“I really think it’s important for people to know if we did tolling, it would cost us, because we’d be getting more (traffic) volume on the street and we wouldn’t be getting the money from the state that we used to,” Boley said.

Other funding options for the project include using fuel, sales and property taxes, according to the memo.

Mayor Lisa Larsen asked Frits whether there are any timelines for funding or constructing the project.

Frits said that funding was the critical component, and that unfortunately he could not tell the commission when the project would happen. The only things about the timeline that he could share, he said, were that the study would take three years, buying right-of-way would take two years and construction would take an additional two to four years, depending on the complexity.

“Unfortunately, I can’t tell you when, but I can tell you the length of time to do those components,” Frits said. He said having funding would be key to having an actual timeline.

The portion of the South Lawrence Trafficway east of Iowa Street was finished in November 2016, completing the final segment of the bypass project. The eastern section is a four-lane divided highway, but the road changes to a traditional two-lane highway west of Iowa Street. The trafficway’s western leg extends from Iowa Street to I-70. The Journal-World reported in December that since the eastern leg opened, traffic volumes on the long-completed western leg have doubled and accidents have soared.

The memo states that the environmental impact study, which will be completed in 2021, will further review the concept alternatives, evaluate the entire corridor for impacts and identify ways to minimize or avoid impacts to sensitive environmental features. The project team is reviewing how each of the alternatives would meet the project’s four identified needs, which are to reduce congestion, enhance safety, promote a multimodal transportation system and support local and regional growth.