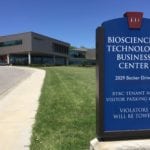 The Bioscience and Technology Business Center at KU

An Australia-based animal health company that received startup funding from both the City of Lawrence and Douglas County has been ordered to repay some of that money now that it has abandoned its local offices.

However, city officials say there’s no easy way for the local governments to collect what they’re owed, because the company appears to be defunct and the money is in a foreign country.

Last year, the two local governments filed a lawsuit against Integrated Animal Health in Douglas County District Court. The lawsuit alleges that the company breached its incentives contract, and the city and county sought to recoup one-third of a $100,000 grant provided to the company as part of the agreement.

Integrated Animal Health has abandoned its lab and office space in Lawrence and was not reachable by the court, and it did not attempt to defend itself against the lawsuit, according to the city. The city asked for a default judgment in the case last month, and Judge Amy J. Hanley recently ruled in favor of the city and county, agreeing that the company had breached its contract with the local governments and ordering it to pay $33,333.33 plus interest.

In the motion, the city states that the company abandoned its local offices sometime in 2017 and that company representatives had not answered or otherwise pleaded or defended the lawsuit. The city states that despite diligent effort, it was unable to locate any officers of the company other than Blake Hawley, the company’s former CEO. It notes that Hawley is no longer affiliated with the company and had in fact filed his own lawsuit against Integrated Animal Health in 2017 in Douglas County District Court and won a default judgment.

The city states that the remaining officers of the company are Australian nationals who are unknown to the city and beyond the city’s reach. In line with state law, the lawsuit was provided to the Kansas Secretary of State’s office because no other officers or resident agents could be located. The state also attempted to serve the defendant but was unsuccessful.

In previous filings with the court, the city stated that it attempted to serve the defendant by providing the lawsuit to its registered agent, a local attorney, in July 2018, but the mailing was returned as undeliverable. The city stated that the attorney had been discharged as the company’s resident agent, and that no other officers could be found because the company had abandoned its local office.

Regarding the next steps, Senior City Attorney Randy Larkin‎ told the Journal-World via email that the city and county can attempt to collect from IAH either through garnishment, replevin, or other type of action permitted by law to recover on a judgment. However, he said those efforts will most likely prove difficult as the company is defunct and the funds are in Australia beyond the jurisdiction of the court and out of the city’s and county’s reach.

Larkin said the city and county knew those circumstances going in, and the primary purpose in proceeding with the lawsuit was for the city and county to have the judgment on record, giving the local governments the ability to collect against IAH if the company attempts to do business in the United States in the future.