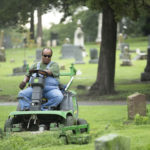 City landscaper Mike Brown carefully steers a lawnmower through the rows of headstones at Oak Hill Cemetery on Thursday, Aug. 30, 2018.

Rogers said the rules, which were adopted after three public meetings held in September and October, will go into effect Jan. 1. The rules do not need to be approved by the Lawrence City Commission because they are part of park guidelines, which are under the department’s purview.

The department oversees three cemeteries — Oak Hill, Maple Grove and Memorial Park — and previously had rules regarding decorations, but those rules were not strictly enforced. The new rules allow additional decorations, such as shepherd hooks, borders and personal items, as long as they are placed within 6 inches of markers and not on the side of the marker that borders the adjacent plot.

Although shepherd hooks and borders will be generally allowed, they will still be banned at Memorial Park and in the veterans areas of Oak Hill. The veteran grave sites at Oak Hill are limited to flat markers.

Previously, the rules stated that no mulching material or gravel were allowed, but the new rules state that mulch, pebbles, rocks, gravel or granite chips may be used as filler between the border and the grave marker. Other personal items, including a limit of one shepherd hook per grave marker, may be placed inside the border or 6-inch permitted decoration area.

Although the new rules do provide some more decoration options, they also more clearly spell out that the city has discretion in maintaining the cemetery. The rules state that the city reserves the right to regulate decorations so the cemetery supervisor can “provide a clean and easily maintained facility.” Nonflower items will be retained for one month and family members can pick up their items from the supervisor.

The final rules are available on the city’s website.