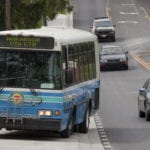 A Lawrence transit bus pulls into a stop along Ninth Street just west of Emery Road in this Journal-World file photo from September 2009.

After 18 years with the same transit operator, a new company will soon take over the city bus service, bringing changes for both riders and drivers — but also more costs for the city of Lawrence, the Journal-World has found after seeking more information about the multimillion-dollar deal.

In November, the Lawrence City Commission voted unanimously to approve a more than $30 million five-year contract with First Transit Inc., beginning Jan. 1. First Transit will take the place of MV Transportation, which has operated the city’s bus service since it began in 2000. Though the city will be paying hundreds of thousands more per year than it would have under MV Transportation, transit officials say the changeover will bring improvements.

Hourly pay for drivers will increase and Public Transit Administrator Bob Nugent said new technology on the buses, including a real-time passenger counter, could help improve routes and timing.

“With real-time information, it will really help us to redesign the service,” Nugent said. “We will have a lot more data and knowledge of what’s going on in the service.”

Cost of the contract

The First Transit contract will cost about $320,000 more on average per year than the one offered by MV Transportation. Despite the difference in cost, a committee tasked with evaluating proposals from both companies ranked First Transit’s proposal higher overall, according to a memo provided to the commission. Cost was only 30 percent of the ranking, and other factors included the quality of the proposal and the experience and qualifications of management staff.

The costs of the proposals were not provided at the time of the commission’s approval. Rather, a memo to the commission only stated that the cost of the new contract with First Transit would be within the approximately $6.7 million budgeted in 2019 to operate the bus service. The memo also stated that a side-by-side comparison of each candidate’s cost proposals was not practical due to the complex variables in the cost proposals and because the final contracted costs are negotiated with the trade union.

Nugent previously told the Journal-World that part of the reason the city was recommending First Transit was due to management. He said MV Transportation lost some of its experience when the previous general manager of 18 years left.

The approximately seven-page contract provided to the commission states that the complete contract incorporates First Transit’s proposal. The proposal, which Nugent said is 935 pages, was not provided to the commission because it includes proprietary information that would need to be reviewed for redactions, according to the memo. The Journal-World requested First Transit’s proposal, but the city indicated that the copying fee, which was necessary because of the redactions, would be about $234.

Without the proposal, information regarding the terms of the agreement is limited, but the seven-page contract provided to the commission does state that the city will establish the fares charged passengers. It does not address wages for drivers and other employees.

Nugent said the full contract also doesn’t address wages, as the city leaves it up to the contractor to decide on aspects such as wages, benefits, driver hours and schedules.

The commission did ask about driver pay before it approved the contract with First Transit. Though First Transit officials did not state what the wage would be, they did say it would be more than what was being offered by MV Transportation.

According to a subsequently posted First Transit job advertisement, the starting wage will be $15 per hour. MV Transportation’s starting wage was about $12 per hour for 2018, according to information provided to the commission in relation to its current contract.

Nugent said the total driver compensation that MV Transportation and First Transit proposed were actually similar, even though the hourly wage differed. He said that First Transit, though it is paying more per hour, was not offering a sign-on bonus, but MV Transportation was. He also said First Transit would be adjusting some work schedules, and drivers could be driving more hours per week than they did with MV, which he said had workweeks between 35 and 40 hours.

The $15 wage would now meet the wage floor that the city uses for its economic incentives policy, which for 2018 is $12.99. Though the city requires companies that receive incentives to pay above the wage floor, it does not have a similar requirement for contractors.

Commissioner Matthew Herbert said that wages for city contractors and direct city employees have been an issue for years, and that he thinks the city needs to be leaders on pay. Although he said the city should make its expectations clear to contractors about paying a wage that allows workers to afford to live in Lawrence, he said he would stop short of putting such requirements into contracts.

“I think our role there is not necessarily micromanaging but to make a clear directive that this is an expectation,” Herbert said.

When the commission approved the contract, commissioners got assurance from First Transit officials that the company would try to hire as many people from MV as possible. Herbert said that workers not losing their jobs because of the transition was as important as wages.

“Our concern was, we are happy to make a change if it means better service and better technology and all of that,” Herbert said. “But if in the process we’re costing a bunch of people their jobs, that’s not as great of a deal as we had hoped.”

Nugent said First Transit has been in Lawrence for more than a month, and management from both companies have been working together to make the transition as seamless as possible.

Nugent said that currently the bus service uses snapshot counts of ridership recorded at certain times, which it then uses to make overall ridership assumptions. He said the real-time passenger counter continually tracks the entrance and exit of riders using electric beams, and the city will be able to track how many riders are on a bus or using a route at any given time. He said that information would inform decisions about routes and frequency of buses.

Nugent said that passenger counter should be in place in a couple of months, and there will be capability to incorporate more technology into the bus system in the future. He said that included electronic announcements of stops and an automated system that would more accurately indicate the location of buses.

“We’re getting a new foundation to the technology and the ability to build on it,” Nugent said.