The Wichita Eagle via AP 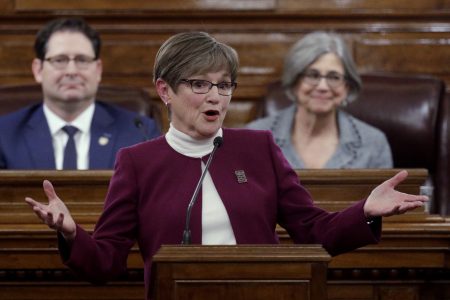 Flanked by Speaker of the House Ron Ryckman Jr., left, and Senate President Susan Wagle, Gov. Laura Kelly outlines her agenda for the Republican-controlled Kansas Legislature in the annual State of the State address Wednesday, Jan. 15, 2020, in Topeka.

Wichita — When Mary Coffman and her husband moved to Overland Park from Oklahoma City in 2014, they found a comparable home – and expected their property taxes to be about the same, too.

The retirees went from paying around $2,600 a year in Oklahoma to $3,200 in Kansas. Six years after their move, Coffman said they’re handing over $5,600 a year, more than double their Oklahoma tax bill.

Coffman said they’re lucky enough that they’re not dependent on Social Security. But they still have to watch their spending and have even talked about returning to Oklahoma.

“I think a lot of retirees look at that. Can I afford staying in Kansas?” Coffman told The Wichita Eagle.

Homeowners across the state are increasingly worried about their property taxes. Collections have risen by more than $1 billion over the past decade. Kansans now pay more than $5 billion in property taxes each year — the 18th highest burden among states, according to a 2019 analysis by WalletHub. Oklahoma ranked 49th.

The taxes fuel city and county governments across the state, as well as public schools.

Democratic Gov. Laura Kelly and Republican lawmakers are pushing separate plans that offer a small amount of relief for taxpayers or slow down rising bills. But they fall short of an overhaul that would dramatically shrink tax bills.

Kelly’s plan could give the owner of a $150,000 Sedgwick County home $30.90 in annual relief while a working group develops recommendations for future changes. Republicans would restrict increases by requiring cities and counties to vote on collecting additional property tax dollars.

Kelly has embraced an incremental approach, envisioning a multi-year tax reform process. A council she created to recommend changes won’t issue its final report until the end of 2020, setting up additional debates in 2021.

The governor wants to take a first step this year by reactivating a property tax relief program dormant since 2003. Her budget would provide about $54 million to local governments in hopes of reducing their reliance on property taxes.

“As funding for schools, cities and counties was cut over the last decade, local units of government were left with few options to make ends meet. Increasing property taxes was one of them,” Kelly said in her State of the State address in January. “This left local communities frustrated, and put a desperate strain on working Kansans and Kansans living on fixed incomes – especially our seniors. They need relief, and we can give it to them in 2020.”

The change would prevent cities and counties from collecting more simply by increasing property valuations. Tyson contends most property taxpayers aren’t as concerned about the valuation or mill levy as they are about the bottom line amount they pay.

“By changing the process, this will require transparency in property tax increases and keep the public informed of proposed property tax changes before an increase occurs,” Tyson said in a statement.

In some parts of Kansas, rising tax bills have been driven in part by soaring property values. Some Johnson County homeowners have seen valuation spikes of 15% or more in recent years.

The situation is less volatile in Sedgwick, the second-largest county. Still, nearly 80% of residential property rose in value last year. The typical change, according to the county, is 4.5%.

Statewide, assessed valuation of all property jumped 5.19% in 2018 – the largest single-year increase since 2006, according to data published last year by the Kansas Association of Counties. Overall, the statewide assessed valuation has risen $5.4 billion over the last decade.

“Property taxes have truly become the ‘tax without representation.’ You ask any lawmaker, state, county or city about rising taxes and they will say, ‘we didn’t raise the mill levy.’ That is very true. Taxes keep going up because the County Appraiser continues to raise property values,” Steve Holloway, a Wichita retiree, wrote in an email.

Holloway said he lives on a fixed income and noted many states either freeze or eliminate property taxes for retired people and those on fixed incomes. He said he’s not looking for a handout, but has paid taxes on his home for 40 years.

“Please stop raising my taxes and reducing benefits,” he wrote.

As Kansas enters an election year, calls for action are growing.

Kelly’s plan would reinstate the local ad valorem tax reduction fund, or LAVTRF. The program hasn’t been funded since 2003, even though it remains on the books.

Under state law, Kansas is supposed to send a share of its sales tax collections to cities and counties each year through the program. The state would pay local governments approximately $100 million a year if funding was fully restored.

Erik Sartorius, director of the League of Kansas Municipalities, said in a statement he was pleased by the plan. Since lawmakers stopped funding the LAVTRF, more than $1.36 billion have been withheld from local governments.

The unfunded program is just part of a larger history of the state reneging on commitments to localities, Sartorius said. Cities haven’t received any transfers from a separate program, the county-city revenue sharing fund, since 2003 – shorting cities by more than $1 billion. And a city-county highway fund hasn’t been entirely funded since 2008, he said.

“The state’s track record for being a straight player with local governments is abysmal,” Sartorius said.

Conservatives contend Kelly’s plan won’t do much. They say that when the property tax relief program was in place, cities and counties often used the dollars to pad budgets rather than hold down bills for property owners.

If Kelly’s plan is approved, homeowners would likely only see modest relief. In Johnson County, someone with a $150,000 home could see about $20 in property tax relief under the restarted LAVTRF, according to an analysis of the plan provided by Senate Minority Leader Anthony Hensley, a Topeka Democrat. In Sedgwick County, the same homeowner could save about $31.

Kelly spokeswoman Dena Sattler said in a statement that restarting the LAVTRF is “just a start” to a tax reform effort that will last multiple years.

“One year of progress cannot undo the severe damage done in recent years, but reinstating LAVTRF transfers is a meaningful stride in the right direction,” Sattler said.

For their part, Republican lawmakers promise legislation clamping down on property tax increases and say they want to make the process more transparent to homeowners. A cornerstone of their plan would require local governments to recalculate their mill levy so that they collect the same revenue as the previous year. If a city or county wants to collect more, they would be required to hold a public vote.

Tyson said the change would “require public officials to vote on a property tax increase rather than increasing valuations that automatically raise property taxes.”

Wichita Mayor Brandon Whipple, a former state representative, said he would need more details on both Kelly and the Republicans’ plans before weighing in on their merits.

“Any changes at the state level could have consequences for us locally,” Whipple said. “We want to make sure that we maintain our local control while also considering the realities of our budget and the burden placed on taxpayers.”

The Senate Tax Committee also recently held a hearing on a bill that would require homeowners to be provided a property tax estimate when they receive their annual notice of valuation. Dave Trabert, CEO of the free-market oriented Kansas Policy Institute, said the lack of transparency is a consistent complaint from taxpayers.

“Giving people a little bit more information is a big step in the right direction,” Trabert told lawmakers as he spoke in support of the bill.

Coffman, the Overland Park homeowner, fears the Republican plan too closely resembles Proposition 13 in California, a law dating back to the 1970s that limits growth in property taxes and requires the state legislature to approve higher tax rates or revenue collections.

“I think if we do that … in the future we’ll see increases in sales tax, in income tax and other things like that to replace that lost revenue that may occur if a county doesn’t vote to increase property taxes when they need to,” she said.

Some officials in Johnson County are seeking assistance targeted to seniors on fixed incomes, who must grapple with skyrocketing property valuations in the state’s wealthiest county.

“People in Prairie Village have seen our appraisals double,” Johnson County Commissioner Becky Fast said. “It’s getting harder and harder for people to stay in Johnson County, and especially hard for seniors to stay in their homes.”

Fast and other officials support a freeze on property tax rates for qualifying seniors and disabled veterans.

House Republican leaders recently unveiled their own plan to reduce taxes on seniors. While it doesn’t deal with property taxes, the proposal would raise the amount of annual income an individual could make without having Social Security benefits taxed by the state. The proposed exemption cutoff would rise from $75,000 to $100,000 under the proposal.

Lawmakers said the change would affect about 80,000 people.

“Why are they going somewhere else? Because things are less expensive when it comes to a tax situation in other states,” Hawkins said.

Coffman said she and her husband would probably decide in the next five years whether to move back to Oklahoma. Over there property taxes are lower, the sales tax on food is lower and there’s no income tax on Social Security benefits.

“I feel this state is taxing everybody to death almost,” Coffman said, referring to Kansas. “I know we’re making up for the Brownback disaster and it’s going to take probably a decade to get back where we were, but I think they need to look at it from a perspective of how do we bring people back to this state and retain people.”