Kelly extends state of emergency through May 14; state to receive 550,000 new tests in coming weeks 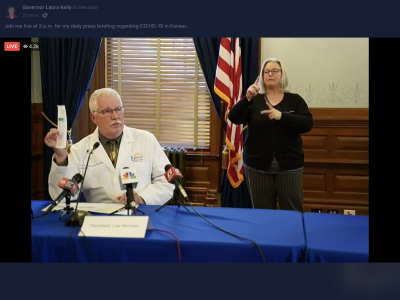 Ahead of Thursday’s announcement on how Kansas will go about slowly reopening amid the COVID-19 pandemic, Gov. Laura Kelly announced Wednesday that she would extend Kansas’ emergency declaration until May 14.

From there, the Kansas State Finance Council — a nine-person committee comprising Kelly and eight legislative leadership positions — has the authority to extend the declaration further to June 13.

If the declaration, which allows resources and personnel to be allocated specifically for COVID-19 operations, has to be extended beyond June, the entire Legislature would have to reconvene and vote to extend the declaration through a concurrent resolution, Kelly said.

The emergency declaration extension does not affect Kansas’ stay-at-home order, which is currently set to expire on May 3. Kelly said she would address what happens after the order expires during Thursday’s announcement on the state reopening plans.

As part of issuing a new emergency declaration, Kelly also has to reissue all relevant executive orders currently in place to line up with the May 14 date. That will take place tomorrow through a single new executive order, and no action will be required by Kansas counties, Kelly said.

Also on Wednesday, Kelly shared that Kansas has been approved to receive 500,000 additional USDA- and FDA-approved test collection kits from overseas, the first 5,000 of which have cleared international customs and should be in the state soon.

Kansas will subsequently receive 10,000 test kits from the order every week until it is filled, Kelly said. In addition, federal partners will give Kansas 25,000 tests this week and 25,000 tests next week to continue ramping up the state’s testing capacity.

“There’s no question that expanded testing for COVID-19 is the key to reopening the state and rebuilding our economy,” Kelly said. “There’s no doubt many parts of the state need stepped-up capability to test Kansans who have symptoms.”

Kelly said she hoped the increased testing capacity would assist in rural parts of the state, where access to health care and testing are “more elusive.”

Kelly said the state was still working to acquire N95 masks and other critical personal protective equipment to ensure the well-being of Kansas’ health care workers. Those efforts were helped by the acquisition of a disinfecting device that can allow masks to be safely reused up to 20 times, but the state still doesn’t have all the supplies it needs.

“We will not rest until everyone has ample and effective equipment they need to stay safe,” she said.

KDHE Secretary Dr. Lee Norman said Wednesday that the state was monitoring 55 clusters, meaning the department had not confirmed a new cluster since Monday. Norman said he was comfortable in saying the state had peaked in terms of hospitalization rates and death rates from the virus, but would continue adding new confirmed cases as Kansas’ testing capacity continues to increase.

The 55 clusters can be traced to the following locations:

• one from a correctional facility in Lansing, resulting in 121 cases and one death;

• six from religious gatherings, resulting in 100 cases and eight deaths;

• 20 from private gatherings, resulting in 170 cases and four deaths;

• six from meatpacking plants, resulting in 451 cases and one death.

Kelly will not hold media briefings related to COVID-19 on Thursday or Friday, but will announce her plan to gradually reopen the state in a locally televised address at 6:30 p.m. Thursday. The announcement will also be streamed on Kelly’s official Facebook page.