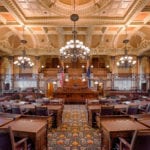 The Senate chamber of the Kansas Statehouse is pictured July 23, 2014, in Topeka.

Topeka ? The Kansas Senate on Tuesday gave first-round approval to the first major budget bill of the session, but it’s one that does not address many of the major issues facing lawmakers such as funding for public schools or restoring previous cuts to higher education.

The preliminary budget bill makes some minor adjustments to the two-year spending plan that lawmakers approved last year. But lawmakers won’t get around to writing a final budget until sometime in May, after they receive new official revenue estimates that will be released April 20.

For example, for the current fiscal year, which ends June 30, Senate Bill 269 adds $1 million for early intervention services through the Kansas Department of Health and Environment for infants and toddlers with disabilities.

It also adds $1.5 million to the Department of Education’s budget to fully fund incentive payments to school districts for students who graduate with a certificate to work in a technical field.

For the fiscal year that begins July 1, it adds $22 million from all funding sources, including $10 million in state money, to increase reimbursement rates for nursing facilities.

There is also an additional $4.7 million from all sources to fund raises for state employees who did not receive raises as part of the pay plan enacted last year. But that does not cover employees of Regents universities or a number of other agencies.

The bill does not include the $107 million that former Gov. Sam Brownback had requested for next year to start phasing in a $600 million increase in public school funding. Nor does it include the $3 million he had requested to pay for start-up costs to establish a dental school at the University of Kansas Medical Center in Kansas City, Kan.

And it does not include the highest priority of the Kansas Board of Regents and the state’s six universities, which was full restoration of the cuts that Brownback ordered in 2016 to balance the budget.

“We put that off to omnibus,” said Sen. Laura Kelly, D-Topeka, referring to the final budget, known as the “omnibus appropriations bill,” that lawmakers will pass at the end of the session in May.

Lawmakers cannot wait until May to enact a new school funding plan, however, because the Supreme Court has given lawmakers a deadline to do something before April 30.

During discussion of other bills related to schools, Senate Minority Leader Anthony Hensley of Topeka offered two amendments to phase in a $600 million increase in school funding, but the Republican majority rejected those, arguing that leaders in both the House and Senate are working on a school funding plan.

Lawmakers are scheduled to adjourn the “regular” part of the session next Friday, April 6, before going home for a three-week break. But Majority Leader Jim Denning, of Overland Park, told the Senate he will not vote for an adjournment until a school funding bill passes.

Most of the hours-long debate over the budget bill was spent discussing various amendments, most of which were rejected.

Sen. Steve Fitzgerald, R-Leavenworth, who is running for the 2nd District congressional seat, offered an amendment to set aside $29,833 in the secretary of state’s budget to pay for publication of proposed constitutional amendments to amend Article 6 of the Kansas Constitution, which deals with school finance.

“It’s time to let the people of Kansas decide if they want to get off the school finance merry-go-round and return control of their tax dollars to their elected representatives,” he said in a statement about his proposal.

That failed, however, on a voice vote.

But later in the day he succeeded in adding an amendment prohibiting any state agency from spending money to conduct research using fetal tissue obtained through an abortion.

Sen. Tom Holland, D-Baldwin City, tried unsuccessfully to add an amendment to restrict the issuance of any new “sales tax and revenue,” or STAR bonds so they could not be used to fund any new arenas or stadiums for professional sports teams, something he said was in response to the use of STAR bonds to build a soccer stadium for Sporting KC.

Debate on the bill ended in confusion when Sen. Dan Kerschen, R-Garden Plain, who was chairing the debate, asked if there were any more amendments.

Sen. Barbara Bollier, R-Mission Hills, stood up to say that she had one, but Kerschen evidently did not see her, and so he recognized Ways and Means Committee Chairwoman Carolyn McGinn, R-Sedgwick, to give a closing speech on the bill.

Bollier, who wanted to introduce an amendment to expand the state’s Medicaid program under the Affordable Care Act, called for a point of order, saying she should have been allowed to offer her amendment. But McGinn objected, and Kerschen ruled that Bollier did not stand up soon enough.

The Senate agreed on a voice vote to advance the bill to final action. That vote is expected to take place Wednesday.