Thousands in Lawrence and Topeka join March for Our Lives protest 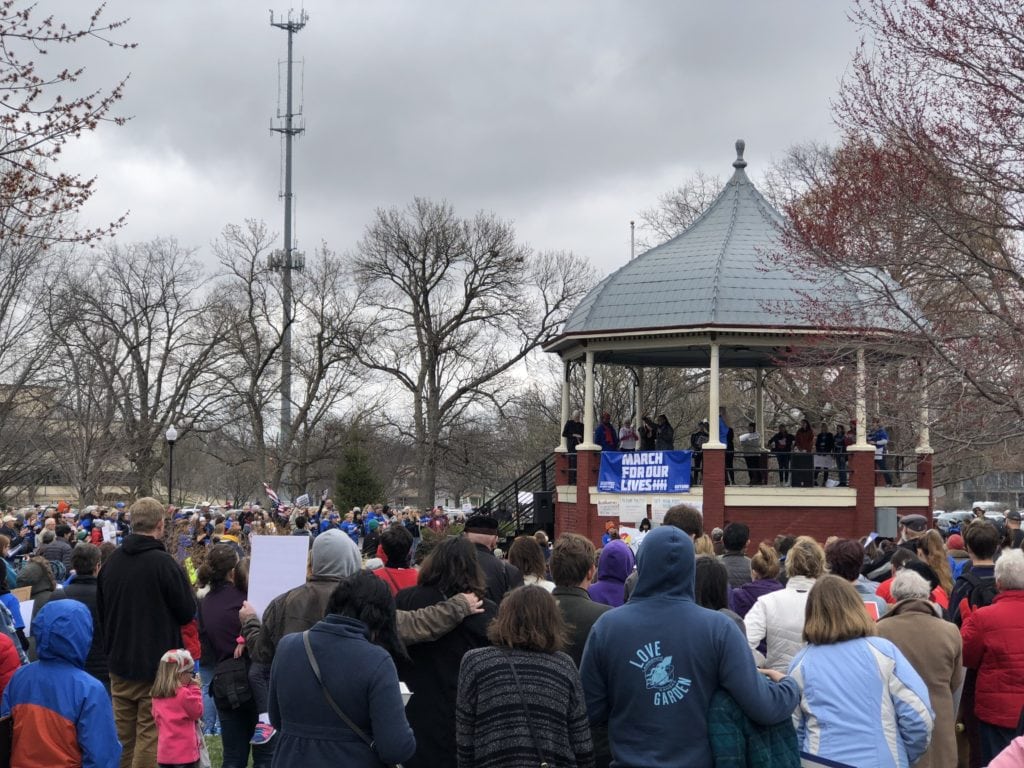 Free State High junior Ruth Gathunguri finishes speaking to the crowd at South Park before the March For Our Lives along Massachusetts Street, Saturday, March 24, 2018.

On Saturday morning, more than 1,000 people marched through the streets of downtown Lawrence calling for an end to gun violence. Not even an hour later, several hundred gathered on the steps of the Kansas Statehouse in Topeka, some 30 miles away. 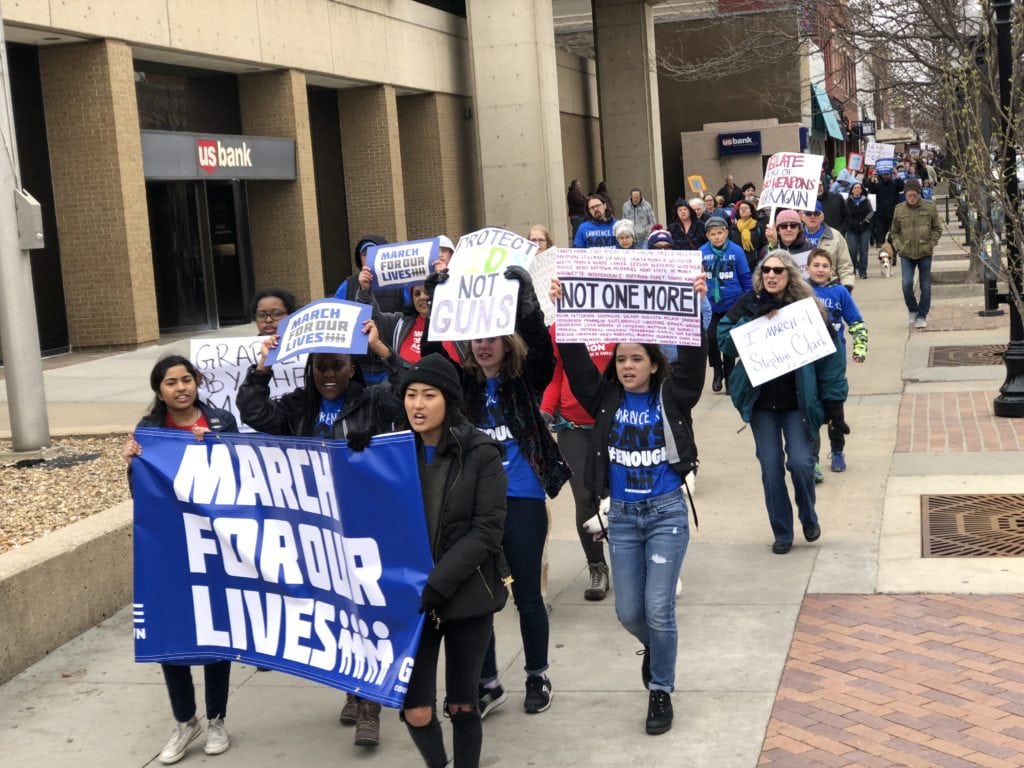 Lawrence students and community members take part in the March For Our Lives on Massachusetts Street, Saturday, March 24, 2018.

The protesters in Lawrence, Topeka and across the globe were speaking out against gun violence and advocating for stricter gun control measures as part of the March for Our Lives movement, which arose in response to February’s school shooting at Parkland, Fla., and other recent mass shootings around the U.S.

Organizers said around 1,700 people gathered at Lawrence’s South Park to show support for responsible gun legislation. The group then marched north along Massachusetts Street, holding signs and chanting slogans such as “Enough is enough” and “Hey, hey, ho, ho, gun violence has got to go.”

Students and local legislators spoke from the South Park gazebo before the march, urging citizens to push for tighter gun control legislation.

Free State senior Sandhya Ravikumar told the crowd that mass shootings have become so common that she and her fellow students have become desensitized to them. She said the march was part of an effort to change that complacency and urged the teens in attendance to register to vote when they turn 18.

“Ninety-six people will die a day — every single day — because of gun violence,” she said. “We came here today to say enough is enough. If I could vote, I would vote. I ask you all to get out there and vote so no more lives have to be lost.”

Lawrence legislators Barbara Ballard, Boog Highberger and Marci Francisco, all Democrats, said they were trying to advance responsible gun legislation despite strong opposition — backed by the National Rifle Association — in Topeka. Highberger said he was a supporter of the Second Amendment, but not as the NRA defined it.

And Ballard said she grew up in a home where guns were kept locked and out of children’s hands until they were old enough to be taught how to safely hunt with them.

The marchers walking down Massachusetts Street on Saturday echoed those sentiments.

Twelve-year-old Michael Leonard, who carried a sign reading “Thoughts and prayers do not save lives,” said he thought the march could be a first step toward change.

“There have been so many school shootings and nobody has done anything,” he said. “It feels like this is a start. There’s a lot of support in Lawrence to do something.”

And marcher Kylie Smith was hopeful that the national movement could send a message and make schools safer for kids, including her 10-year-old son, Skyler.

“My son should be safe when he goes to school,” she said. “I have always been opposed to irresponsible gun laws. I hope this time we can make a difference.”

Nevertheless, Free State student Grace Porter reminded attendees the march was only the beginning and that it would take a lot of effort to reform gun laws.

“We can march, we can make posters, but what are we going to do next?” she asked. “We have to get involved. We have to vote. We have to contact our representatives. We can call our senators and sit down and have a conversation with them. These things are accessible to us. We have to use the tools we have to be a part of this democracy to make the changes we want to see.”

Some local high schoolers also took their fight against gun violence to the Kansas Statehouse on Saturday.

Among the crowd of more than 700 protesters at the Statehouse were more than a dozen Lawrence High School students who had traveled to Topeka for the occasion, braving the blustery wind and chilly temperatures during what was one of their last remaining days of spring break.

Noah Ginsberg, a junior at LHS, said he had been “criticized” by some of his friends and peers for his decision to attend the rally. He’d been warned that he could become ostracized on social media for it, he said. But Ginsberg, 17, feels “there’s no reason not to let your voice be heard,” especially on an issue that he feels should be nonpartisan.

Civic involvement was a major theme of Saturday’s protest, with multiple speakers calling on young people to become actively engaged in their government. In her remarks from the Statehouse steps, Topeka Mayor Michelle De La Isla encouraged young protesters not to be discouraged by those who say teens are not old enough to voice their opinions on gun control.

“We have heard from great leaders that we have government for the people, by the people,” she said. “And never once in our Constitution does it say that because you are not of voting age that you don’t have a voice.”

Barry Grissom, who served as the U.S. attorney for Kansas from 2010 to 2016, said politicians have been slow to pass even the broadest gun control measures despite constituents being largely in favor of relatively small reforms. Grissom cited recent poll results that he said he’d had trouble believing at first — that around 90 percent of Americans now support universal background checks on firearms.

Polls that CBS News and Quinnipiac University conducted in 2016 and 2017, respectively, both hover around 90 percent. Several other polls taken within the last two years also reveal broad support, give or take a few percentage points, for such measures.

Grissom, a self-proclaimed responsible gun owner, said his generation had failed in pushing legislators to pass common-sense gun reform, but he sees hope in today’s teens.

“As I stand here today and I see the energy, I see the commitment on the faces of these young people, I know my generation has passed the torch to these folks,” Grissom said.

“I know the folks behind those doors, they’re going to be listening come Monday,” he later said, gesturing toward the Statehouse entrance.

Students seemed to respond to that message. Later, when Grissom called on the crowd to promise each other to call their legislators on Monday, chants broke out from the teenagers gathered at the bottom of the Statehouse steps: “Time for a change! Time for a change!”

Julia Howell, a senior at Topeka High School who helped organize her school’s March 14 walkout, called on adults to practice a little empathy when dealing with young people. Howell said she was born in 1999, the same year that the deadly Columbine High School shooting took place in Colorado. Since then, she said, school shootings have become “normalized,” an accepted fact of life for a generation born and raised in the aftermath of Columbine.

But it shouldn’t be that way, Howell argued. It wasn’t that way for her parents, she said.

“This is our time now,” she told the crowd. “And we are calling BS!”

Sami Turner, a sophomore at Lawrence High, said she attended Saturday’s rally because she wants — and hopes — to “see change” in Kansas laws, including stricter background checks for those purchasing guns.

Earlier this month, the Kansas Senate passed a bill prohibiting people convicted of misdemeanor domestic battery from possessing firearms. Turner sees the bill as “a good start,” she said, “but we need to go further.”

“It definitely doesn’t stop here or on April 20,” Turner said, referring to National High School Walkout Day, planned for the anniversary of the Columbine massacre. “We’re going to keep going.”

Jim McHenry, a Topeka resident who spoke at a gun control rally earlier this month at the Statehouse, visited with Turner and her peers Saturday morning and offered some words of encouragement.

McHenry is among the survivors of the 1966 mass shooting at the University of Texas, where gunman Charles Whitman killed 14 people and injured 31 others from the observation deck atop the school’s Main Building tower.

“I’m just so heartened by the response of young people,” McHenry said.

The students said they would work to prevent the kind of tragedy McHenry lived through so that future generations won’t have to live in fear.

Signs carried by student protesters that day asked questions of those in charge, inquiring “Why are we making our children be braver than politicians?” and “Am I next?”

Others ditched the earnest pleas and instead issued a warning to lawmakers. One young woman’s message:

“Watch out!” her sign read. “I’m registering to vote today.”