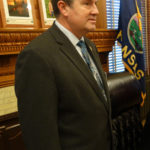 Rep. Keith Esau, R-Olathe, is pictured in this file photo from Jan. 18, 2017, at the Kansas Statehouse in Topeka.

In a statement, Esau said he supports the restrictive voter registration laws championed by the current secretary of state, Republican Kris Kobach, but he also acknowledged the growing threat of election tampering from outside sources.

“While we must continue to be vigilant watching the front door of our polling places by ensuring proper registration and identification of all voters, we must now also keep watch on the back door — defending our election systems, business filings, and lien records from electronic tampering and manipulation,” Esau said in the statement.

Kobach is not seeking re-election to the secretary of state’s office, but rather is seeking the GOP nomination for governor.

Also Monday, Craig McCullah, a former deputy assistant secretary of state who resigned from that office on Friday, announced he plans to enter the GOP race as well. McCullah headed the administrative division which includes the finance, human resources and information technology departments. In a statement, McCullah touted ideas for making the office more efficient an transparent and said he would work to “make it easier and less costly for citizens to navigate state government.”

Also running on the GOP side are Kansas Republican Party Chairman Kelly Arnold, of Wichita, and House Speaker Pro Tem Scott Schwab, of Olathe, who have formed campaign committees to seek the GOP nomination, but they have not yet officially filed.

On the Democratic side, Sen. Marci Francisco, of Lawrence, and Brian McClendon, of Lawrence, a software engineer who was one of the founders of Google Earth, have also formed campaign committees.