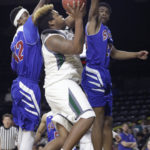 WICHITA — Known for its high-scoring offense, Free State’s boys basketball team relied on its defense to survive against Wichita South in the Class 6A state quarterfinals Thursday.

The Firebirds scored their fewest points of the season, failing to find a rhythm in the paint or 3-point line, but made enough to stops on defense to hold onto a 42-41 victory at Wichita State’s Koch Arena.

Free State led for the entire second half but never by more than five points. With nine seconds left, senior guard Simon McCaffrey was sent to the free-throw line with a one-point lead. He calmly swished both attempts for his first points of the game.

“I just knew the season was on the line and I needed to step up and hit the free throws,” McCaffrey said. “So that’s what I did.”

Following McCaffrey’s free throws, the seventh-seeded Titans (13-10) couldn’t find an open 3-point shooter. Free State senior Garrett Luinstra partially deflected a shot and a meaningless layup was made at the buzzer as the Firebirds skipped back to their bench in celebration.

The second-seeded Firebirds (18-5), returning to the state semifinals for the second consecutive year, will play Topeka (17-6) at 4:45 p.m. Friday.

“Second half and halftime, we were just talking about defensive intensity, getting some charges, just being all out and not letting down,” said FSHS junior Noah Butler, who scored eight points by crashing the offensive glass.

For Free State, the biggest obstacle in the paint was Wichita South’s talented 6-foot-8 forward Remy Lemovou (11 points, 15 rebounds), who blocked six shots and affected several others. Butler said Lemovou’s long wingspan was different than anything they’ve faced this season.

When Lemovou briefly sat on the bench with his third foul in the third quarter, Free State’s 6-foot-5 senior Jalan Robinson scored on back-to-back possessions in the low post. Robinson (11 points, nine rebounds) scored all eight of his team’s points in the third quarter.

“We needed to get him out,” Robinson said of Lemovou. “He had about eight blocks in the first half. We knew we had to get him in foul trouble.”

Butler added of Robinson: “He’s just a monster when he gets going. We need that more.”

Loose in the locker room prior to the game, the Firebirds didn’t make a shot for the first seven minutes of the first quarter until Luinstra swished a 3 from the top of the arc. Luinstra, who will walk on at Kansas next year, scored all seven of Free State’s points in the opening quarter.

The Firebirds took their first lead midway through the second quarter when Luinstra drilled a 3-pointer from the corner on a pass from senior Reece White-Downing. Luinstra scored 12 of his game-high 15 points in the first half.

“You saw a score yesterday in 5A, it was 15-15 at half,” Free State coach Sam Stroh said. “I reminded the guys, just keep playing. We did enough to win and an ugly win is better than a loss.”

Defensively, the Firebirds limited offensive rebounds and forced 15 turnovers. They drew three charges in the second half, including two by White-Downing.

The result of their defensive efforts is an opportunity to play for a spot in the state championship game.