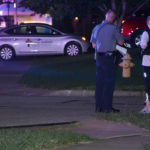 A three-and-a-half hour armed standoff in north-central Lawrence ended Saturday morning with one arrest and a shot fired by a Lawrence police officer, but no injuries.

At 9:52 p.m. Friday, officers were dispatched to the 400 block of North Crestline Drive for a report involving disturbance with weapons, according to a press release from the Lawrence Police Department.

The suspect fled the Crestline scene by car and went slightly north to the 600 block of Stowe Court. An officer made contact with the suspect, a struggle ensued and the suspect retreated to a house, according to police.

The release did not provide details on how the standoff ended, other than that the suspect was taken into custody without injury.

The involved officer is on paid administrative leave, pending an investigation. The investigation will be handled by the Johnson County Sheriff’s Office.

Police did not release any details about the suspect, the initial disturbance with weapons call or the type of weapon the suspect reportedly brandished.

The 600 block of Stowe Court also was the site of an armed standoff in December 2017. Police made one arrest in that case after a male subject fired shots in the air and then retreated to his house where an approximately four-hour standoff ensued. Police did not identify the person in that incident.

Information was not available about whether Friday night’s incident was related to the December incident.

Check back for updates as more details become available.