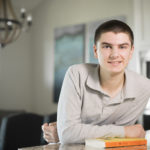 Lawrence teen Elliott Whisenant is the brains behind legislation introduced by Rep. Tom Sloan, R-Lawrence, which reduced restrictions on organ donations. The bill was signed into law and will go into effect on July 1, 2018.

Starting July 1, those applying for a driver’s license, renewing a license or adjusting to an expired license will have a much easier time signing up as organ donors.

All this thanks, at least partially, to a kid who isn’t even of legal driving age.

The bill was signed into law last month after receiving unanimous votes in both the House and Senate.

“I didn’t really think of it as a Democratic or Republican issue,” Whisenant, 15, says of the bill drafted by Sloan.

The teen “doesn’t remember much” about his long-term goals when he first approached Sloan almost exactly one year ago. He does, however, remember re-reading the 2008 book “Nudge: Improving Decisions about Health, Wealth, and Happiness,” by University of Chicago economist Richard H. Thaler and Harvard Law School professor Cass R. Sunstein.

Last year, when reading the book again, Whisenant thought back to the section on opt-out organ donation. “Presumed consent” laws have already been implemented in several European countries and even a few U.S. states, including New York and Illinois. The concept behind the laws is simple — government can “nudge” people toward donating their organs after death simply by changing the default option from “no” to “yes.”

“I thought, ‘Well, this is a good idea.’ It’s minimal effort, and it’s of very large benefit. So why don’t we see if it’s currently in place?” Whisenant recalls. “And it was not. So I thought, Well, I’ll just send an email out to the legislators, just ’cause.”

Sloan responded to his email and arranged to meet with Whisenant over coffee. The soon-to-be-retired Lawrence Republican said it was too late to introduce the initiative for the 2017 session, but agreed to work on a bill for 2018. He said he’d use Whisenant’s 10-page research document as a reference when drafting the bill, Whisenant remembers.

And then, the teen testified in support of the bill in both the Kansas House and Senate, to positive reception, earlier this year.

“What I thought, and almost all the committee members agreed, is that it’s a good bill,” Whisenant says, adding, “The chairman of the House also said that my presentation was almost on par with some of the professional presentations by the lobbyists who come in there, and that they were very impressed about how prepared I was.”

Whisenant says the bill also removes a requirement that adult siblings of the deceased must unanimously agree to permit the organ donation. Effective July 1, only a majority will be needed, as opposed to unanimous agreement. Health care providers will be exempt from liability in performing organ transplants, as long as they act in good faith.

The experience, Whisenant says, has boosted his confidence and bolstered his simple, no-nonsense approach to effecting positive change. He’s got his eye on a few of the other initiatives described in “Nudge,” but doesn’t have one single pet project he’ll put his energy into next.

One of those ideas, he says, is the use of urinal flies — stickers placed onto toilet bowls with the aim of, well, improving men’s aim — as a simple, effective way to reduce cleaning costs in public restrooms. When flies were added to Amsterdam’s Schiphol Airport, for example, “spillage” rates dropped 80 percent, according to airport officials.

All the ideas in “Nudge,” Whisenant says, have one thing in common.

“If you change it a little bit, you get a really big result — without having to go through some really long legislative process or lots of rules or lots of regulations, or just lots of things in general,” Whisenant says. “It’s really small, but it has a really big impact.”

Despite his success in helping to pass the state’s new organ donation laws, Whisenant says he’s not necessarily interested in going into politics or lobbying. Whatever he chooses to do, he can still work toward change, he says. And others can, too.

“I think what a lot of people are thinking is that one of the main or only ways that they can change government is through voting. But they forget all the other things,” Whisenant says. “You can go protest or you can go and write people letters or emails, or you can go meet with them.”

“And so this,” he says, referring to his work on the organ donation law, “is one of those lesser known and not as glamorous things.”

By the way, Whisenant won’t be eligible for his driver’s license for several months. But on his learner’s permit, he says, there’s a small designation that reads “organ donor.”