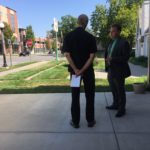 A former South Middle School teacher was granted probation Friday in a case stemming from his March arrest after reportedly showing up intoxicated and creating a disturbance at the school.

Judge Scott Miller sentenced Chris Cobb, 57, to one year of probation, with an underlying jail sentence of 180 days that he could potentially serve should he break the probation terms. He was also ordered to pay $700 in fines, plus $113 in court costs and other fees.

Cobb, who taught sixth-grade social studies at South, now known as Billy Mills Middle School, resigned from his job in fall 2016 following allegations that he had made racist comments in class. He has since denied all wrongdoing, and the school district has never released details of the investigation.

On March 29, 2018, a seemingly drunk Cobb walked into the school’s main office and began making threatening comments toward the school district at large, Principal Keith Jones told parents, faculty and staff at the time. The incident was confined to the office, but it did prompt the school to go on lockdown for about 10 minutes.

Police then arrested Cobb at the school on suspicion of misdemeanor charges of criminal trespassing, disorderly conduct and interference with duties of a police officer.

On Friday, Cobb pleaded no contest to the charges of criminal trespassing and interference with duties of a police officer. Prosecutors had dismissed the disorderly conduct charges, Miller said.

David told the judge that the arrest had been a “wakeup call” for Cobb, who he said has remained sober ever since.

“He did realize he had a drinking problem with this case and that he needed to stop using alcohol,” David said. “And Mr. Cobb is very remorseful for what happened.”

Miller described video footage of Cobb’s arrest as “alarming.” He said the situation started out “relatively peaceably,” but then began to “spin out of control” once police arrived and later transported Cobb to the Douglas County Jail.

“Your quotes that were reflected in the police report were things like, ‘You’ll all pay,’ ‘You don’t know what’s coming,’ ‘I’m going to kill people, lots of people, millions and billions of people,'” Miller told Cobb Friday at the municipal court.

The judge said he hoped, based on Cobb’s lack of prior criminal history, that the outburst and ensuing arrest would be an “isolated incident.”

“Obviously in the age that we live in, we’ve seen problems every day with people who are irate, who decide they want to go out and exact a form of revenge on people in their communities, people that they’ve worked with,” Miller said. “I hope I’m making the right decision by following this plea agreement.”

As part of his probation, Cobb is ordered to undergo both mental-health and substance abuse evaluations, as well as refrain from all drug and alcohol use. He will also be subjected to drug and alcohol testing at his own expense.

Miller also ordered that Cobb have no contact with Jones and two other school staff members and stay away from all Lawrence Public Schools property.

If Cobb violates the terms of his probation, Miller said, the court would revisit whether Cobb should serve his 180-day jail sentence. New charges could also be filed if he returns to any district property.

Prior to his March arrest, Cobb had no criminal record in the state of Kansas, Miller said. The former teacher previously failed to appear at his first scheduled hearing for this case, in April.