Jeff Sessions bashes KU’s use of therapy dogs in speech to conservative group, joins ‘lock her up’ chant 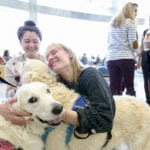 Stress-busting dogs: University of Kansas seniors Emmile O'Hara, Chicago, front, and Michelle Johnson, Wichita, stop to give some hugs to two English cream retrievers, Gunner and Annie Oakley, on Tuesday, Dec. 5, 2017, in the McClendon atrium of the LEEP 2 building. Several dogs visited the School of Engineering as part of a "Stress Busting Study Break" organized by representatives of Watkins Health Center's Health Education Resource Office to give students studying for finals a moment of stress relief.

The University of Kansas took a jab from U.S. Attorney General Jeff Sessions on Tuesday for its use of therapy dogs on campus. Apparently, the country’s top law enforcement officer is not a fan.

Sessions was addressing a conservative group’s high school leadership summit in Washington, D.C., when he referenced KU and a handful of other universities that he criticized for “coddling our young people” and “actively preventing them from scrutinizing the validity of their beliefs,” according to CNN. He also joined the crowd in shouting “Lock her up,” recalling the infamous chant from Donald Trump’s 2016 campaign rallies against Hillary Clinton.

“After the 2016 election, for example, they held a ‘cry-in’ at Cornell. I hope they had plenty of tissues for them to cry on,” Sessions said Tuesday. “They had therapy dogs at the University of Kansas. Play-Doh and coloring books at the University of Michigan for heaven’s sakes. You know, give me a break. Students at Tufts were encouraged to ‘draw about their feelings.'”

Sessions’ remarks were seemingly in reference to KU’s animal therapy outreach programs, which bring in therapy dogs to help relieve stress among students during final exams and periodically throughout the year. KU is among many colleges and universities across the country that have hosted similar programs — including Sessions’ own undergraduate alma mater, Huntingdon College in Montgomery, Ala.

An employee in Huntingdon’s Student Life program confirmed to the Journal-World that the college has offered a therapy dog program for at least six years and that it has been a popular stress-relieving activity for students.

Sessions on Tuesday complimented the conservative crowd for its supposed toughness.

“Well I can tell this group isn’t going to have to have Play-Doh when you get attacked in college and you get involved in a debate,” Sessions reportedly told the crowd attending Turning Point USA’s High School Leadership Summit at George Washington University. “I like this bunch, I got to tell you. You’re not going to be backing down. Go get ’em. Go get ’em.”

In response, KU spokesman Andy Hyland said the university does not “own” therapy dogs but partners with local nonprofits such as Loving Paws Animal Therapy “to provide scheduled opportunities for KU students to interact with certified therapy dogs during the school year.” The on-campus programs are supervised by KU’s Watkins Health Services’ Health Education Resource Office.