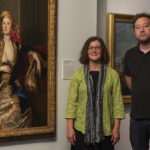 photo by: Ryan Waggoner/Spencer Museum of Art, The University of Kansas

Researchers at the Spencer Museum of Art have just solved a mystery more than 60 years in the making.

The artist behind one of the museum’s most beloved works, a nearly life-size portrait of “Mrs. Thomas Pelham,” was finally revealed this week as British portraitist and illustrator John Vanderbank, bringing to a close years of speculation and incorrect guesses.

The painting had been attributed to other artists over the years — most recently, Joseph Highmore — for one simple reason: It didn’t have a signature.

“There are many major paintings that don’t have signatures,” Earle says. “I think Rembrandt was famous for often not signing his paintings.”

It’s also common to see museums revisit unsigned pieces periodically, looking for new clues that might point researchers toward the true artist. “Mrs. Thomas Pelham,” with its subject’s embroidered Turkish clothing, plunging neckline and suggestive pose, has been a favorite at the Spencer Museum since its arrival there in 1950. 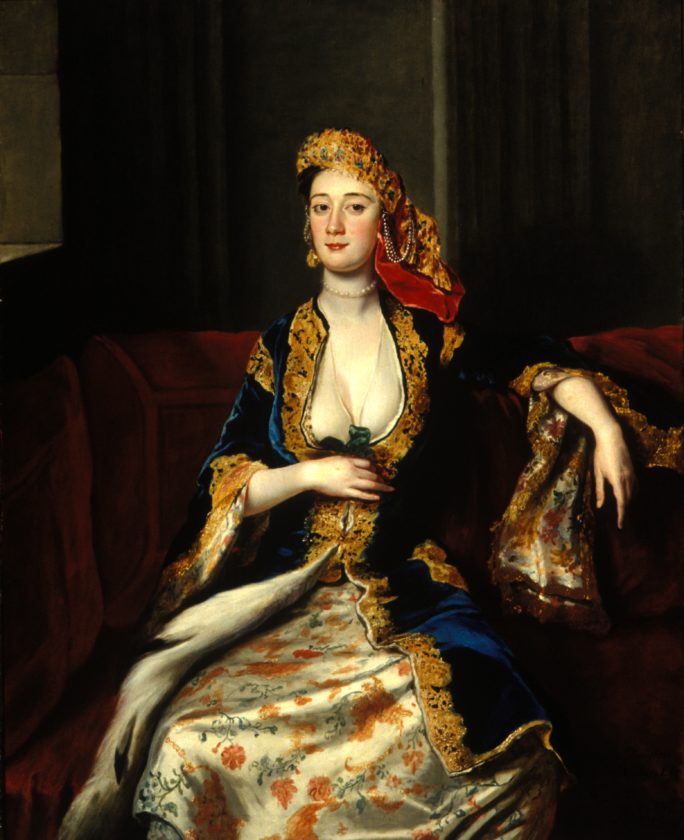 photo by: Image courtesy of the Spencer Museum of Art, The University of Kansas

And over the years, it’s been attributed to a few different artists — first, William Hoare, and then, sometime before the 1980s, to Highmore. But museum curators had never been 100 percent sure of the 1720s-era painting’s true origin, until now.

“It’s a work that I’ve encouraged several students to do research on, partly because it’s pretty unusual. The suggestiveness of Mrs. Pelham’s pose is unusual for that time period,” Earle says. “I kept trying to get students to learn more about it and see if we could get a better sense of who the artist was.”

Luckily, Earle says, two of the museum’s interns in recent years seemed to have an affinity for 18th-century British portraiture and the kind of research work necessary to crack the “Mrs. Thomas Pelham” case. The mystery was finally revealed a few weeks ago when Earle and intern Tyler York wrote a proposal to reattribute the painting to Vanderbank and install a new label on the wall next to it.

York, a doctoral student in art history, recently wrapped a yearlong stint as the Spencer’s Andrew W. Mellon Foundation/Loo Family Intern for European and American Art. Building on the work of his predecessor Chassica Kirchhoff, a 2010 intern, York studied now-digitized records from British archives that provided a more clear connection between Vanderbank and the painting’s subject, Annetta Pelham.

Turns out, Annetta had died only a few years after marrying Thomas, giving York a narrow time frame when the portrait could have been painted. Vanderbank “had a really interesting and illustrious career,” Earle says, but “was not a great business manager,” which is why he fled England for France to avoid creditors in 1729.

The other two artists, Hoare and Highmore, were not as prominent in the British portraiture scene at the time, but Vanderbank — noted for his portraits of Sir Isaac Newton, King George I and others among Britain’s ruling class — would have been popular with elite families such as the Pelhams.

There were several little details linking Vanderbank to the Pelhams, such as the probable business connection between Thomas Pelham, a prosperous textile merchant, and Vanderbank’s father, who headed a prestigious tapestry workshop.

Perhaps most important, though, was the style of the painting. It’s a good match with Vanderbank’s, Earle says.

“It’s really looking very closely at lots of books of 18th-century British portraiture,” Earle says. ” … The key issue at any time of identifying an artist as the likely author of the painting or the artist who made the painting is, it has to connect visually.”

“It has to be the same kind of approach to the work that you see in the painting in question,” she adds.

With the “Mrs. Thomas Pelham” mystery solved, what’s next? For starters, there’s no award, no certificate, no big accolade that comes with properly attributing a work of art, Earle says. And there’s certainly no additional funding because of it.

But there is a sense of pride that comes with answering a decades-old question, she says.

“Anytime we can invest the energy in making that more secure, that information more solid, we feel excited,” Earle says. “And we feel it’s a big success and a triumph.

“That has to be its own reward,” she says.