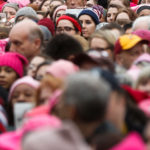 Jolene Andersen is looking to re-create a life-changing experience Saturday with the 2018 Women’s March in Lawrence.

Andersen was one of millions of people who participated in the Women’s March on Washington (and around the globe) the day after President Trump’s inauguration last year. The march, which advocated for rights for women and minorities, as well as immigration reform and other issues, made the pink stocking hat a symbol of resistance to Trump’s administration. It was by many estimates the largest single-day protest in American history.

“It absolutely changed my life,” Andersen said. “I’m 71. To go to something like that when you are that old and have your life changed is absolutely remarkable. It was about solidarity and the power of women. I believe the human race is evolving, and we are moving to a whole new level, and women are leading the way.”

Andersen said she was eager to experience the energy of that day again this year and had been considering attending a march in either Chicago or St. Louis because there was no march planned for Kansas City. Plans for a trip ended when Andersen and her friend Christine Smith learned there was to be a march in Pittsburg.

“We said, ‘If Pittsburg, Kansas, can have a march, we can have one in Lawrence,'” she said. ?”And that’s how it got started.”

The march Andersen and Smith organized will be from 1 p.m. to 3 p.m. Saturday. It will start at the gazebo in South Park with speeches from City Commissioner Lisa Larsen; Brooklynne Mosley, a Kansas Democratic Party organizer; Caryn Mirriam-Goldberg, Kansas poet laureate from 2009 to 2013; Julia Good Fox, author and dean of Natural and Social Sciences at Haskell Indian Nations University; and the Rev. Sherrie Taylor-Jones, Unity Church of Lawrence. Cindy Novolo, Unity Church choir director, will be at the park to teach marchers songs.

The six-block march will be on Massachusetts Street from South Park to Lawrence City Hall. Marchers will walk on the east sidewalk to City Hall and the west sidewalk back to the park, Andersen said.

The march has garnered considerable interest. As of Wednesday, about 1,000 people had indicated on the Women’s March 2018 Facebook page that they would attend.

“We agreed if we had 20 people, it would be worth it,” Andersen said. “We thought maybe we’d have 100. To have 1,000 is exciting and very gratifying. It’s not only Lawrence. We have people coming from Kansas City and Salina. I think that’s important. Lawrence has powerful women everywhere. In some places in Kansas, women can feel isolated. We have to show them support to be empowered.”

Andersen said Trump’s words in the past year have driven interest in standing against his policies.

“When the president is making those horrible, racist statements, we have to take back our power. Of course, the pink hat symbolizes the resistance to the Grabber in Chief,” she said, referring to an infamous video in which Trump bragged about grabbing women by their genitals without their consent.