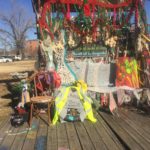 The East Lawrence Neighborhood Association has organized a crowdsourcing campaign to pay for repairs to the Wishing Bench, pictured here at its home near Ninth and Delaware streets in East Lawrence. After nearly 10 years, some portions of the bench's wooden base have rotted away, while other planks have become warped and unstable, neighbors say.

How the Wishing Bench arrived at its perch isn’t quite clear. Lane Eisenbart, who lives near the quirky structure’s home at Ninth and Delaware streets, has heard “lots of stories” over the years about the shrine-like creation.

“Everybody loves the Wishing Bench,” says Eisenbart, a longtime East Lawrence resident leading the charge in fundraising efforts to repair the bench after nearly 10 years of wear and tear.

Eisenbart, who serves as coordinator of the East Lawrence Neighborhood Association, launched a crowdsourcing campaign last month to support the project. She and other neighbors are hoping to collect $650 to restore the Wishing Bench’s now rickety and rotted wooden base.

“I think when it was put on that platform, it was untreated wood,” Eisenbart said. “It’s been almost 10 years now, and the wood has just degraded … it’s become unsafe.”

Restoration efforts have been discussed at ELNA board meetings for a few months now, with several well-known East Lawrence figures voicing their support for the project, Eisenbart said.

Artist Dave Loewenstein is one of them.

“I think what’s sort of interesting about this is, this is something that’s beloved in the community, and yet it doesn’t have formal ownership,” says Loewenstein, who lives and works in East Lawrence.

Loewenstein isn’t sure how the Wishing Bench arrived in the area, but his best guess suggests the structure began as a temporary University of Kansas School of Architecture project that eventually was “adopted” by the surrounding neighborhood.

“Those of us who live over there have seen lots of people enjoying and taking photographs over there, and we want to make sure it keeps going,” says Loewenstein, who describes the bench as a kind of “community trust.”

Eisenbart has a different understanding of the Wishing Bench’s origins — that it was given to the neighborhood nearly 10 years ago by the property’s former owner and the developer of the nearby Hobbs Taylor Lofts, Bo Harris.

However it came to be, the Wishing Bench “means different things to different people,” says Eisenbart. That’s why she’s now calling on the entire community to help repair it.

“For me, it’s almost a spiritual place,” Eisenbart says. “I’m not really a church-going person, but I will often go there (to the bench) when I need a place to think or a place to worry.

Eisenbart also said the current property owner, Warehouse Arts District developer Tony Krsnich, has allowed the Wishing Bench to remain at the intersection of Ninth and Delaware streets despite his plans to eventually build a pair of multistory apartment buildings on the site.

“There might be a time when we have to move it,” Eisenbart said of the Wishing Bench, but that’s another discussion for another time.

In the meantime, Eisenbart and her friends are hoping to raise enough money to repair the bench in the spring, when the weather heats up. Eric Jay, an ELNA board member and an owner of East Lawrence’s Struct/Restruct construction company, has already pledged to supervise repairs, Eisenbart said.

So far, as of Wednesday, the Wishing Bench campaign had raised $195 toward its $650 goal. Donations can be made online at www.gofundme.com/wishing-bench-repair-fund.