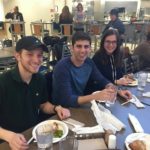 University of Kansas students eat the first kosher dinner at South Dining Commons on the evening of Tuesday, Feb. 13, 2018. The kitchen is the result of a new partnership between KU Dining Services and KU Chabad, the university’s center for Jewish life.

Oliver Hall is now home to the “first entirely kosher kitchen” on the University of Kansas campus, KU announced recently.

The kitchen, which served its first dinner last week, is the result of a new partnership between KU Dining Services and KU Chabad, the university’s center for Jewish life.

According to a news release from KU Dining Services, the two entities “saw an opportunity” to expand meal options after KU’s new South Dining Commons, which connects Oliver and Cora Downs residence halls, opened in August 2017. With the original Oliver Dining Hall kitchen out of commission, KU Dining Services and KU Chabad worked throughout the fall semester to repurpose the old space into the brand-new kosher kitchen.

The kitchen operates under the supervision of Rabbi Zalman Tiechtel of KU Chabad to serve kosher food, meaning it has been produced or prepared according to Jewish dietary laws.

“The Jewish community at KU is vibrant and is growing, and there was always a need for some Kosher food,” Tiechtel said in the news release. “We’re so thankful to the incredible people at KU Dining who are partnering with us to provide this incredible service for so many Jayhawks who now have an opportunity to come and get a delicious dinner.”

Kosher dinners will be available between 4:30 and 7:30 p.m. Tuesdays (while classes are in session), the news release said. KU students can use their meal plans toward dinners at the kosher kitchen, at 1815 Naismith Drive, and those without meal plans (including the general public) can eat by paying an entry fee at the South Dining Commons.