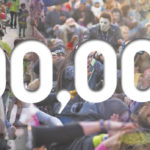 The population of the City of Lawrence has reached a milestone.

According to estimates from the city’s planning and development department, Lawrence’s population crossed the 100,000 threshold this year. To be exact, planners estimate that the city’s population is now 102,002.

That figure represents a jump of about 2,500 people, or about 2.5 percent, over last year, and the biggest increase in more than a decade.

Mayor Stuart Boley said he thinks the trend shows there are a lot of people who love Lawrence. Boley said good city planning has helped prepare the city for such increases, and that the city is fortunate to have a community that is able to attract newcomers.

“I think if you put it in the context of a lot of places that are losing population, we are very fortunate here,” Boley said.

The last year the city’s population increased by 2.5 percent in one year was 2005, according to city figures.

Crick said no trends stood out to planners about the uptick, and he speculated the population spike was related to to the recent building boom of both multifamily and single-family homes in Lawrence. He said many of those units are just now becoming available.

“It’s kind of the population catching up with that previous building that we’ve seen in the past year or two,” Crick said.

Crick said the city tracks population a little more closely than the Census, and the city’s figures typically differ from those estimates. The next Census will be in 2020.

Boley said he thinks continued planning, especially the ongoing update to the comprehensive plan, will make sure the city is able to manage its growth and remain an attractive community into the future.