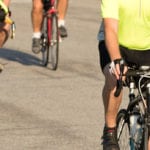 A group of cyclists rides along a Lawrence street in this file photo from August 2016.

The city’s Transportation Commission is recommending several bike and pedestrian projects, including the creation of the city’s first bicycle boulevards. The boulevards would be located on 21st Street and Lawrence Avenue and would be funded using money that has already been set aside for pedestrian and bicycle improvements.

Transportation Commission Chair Erin Paden said bike boulevards use a street that already has low car traffic volume and then add several other measures — such as traffic diverters, lower speed limits and speed bumps — to prioritize the road for bicycles. She said that taken together, the measures discourage motorists from using the road as a means to cut through.

“Unless you live on that street, you’re probably not going to drive down it,” Paden said. “You’re not going to want to use it as a cut-through.”

There are eight design elements used to create bike boulevards, including management of speed, volume and crossings, as well as the addition of signs and pavement markings, according to the National Association of Transportation Officials. Bicycle boulevards should have a maximum posted speed of 25 mph and can use medians or other devices to limit through traffic.

Paden said measures currently used in Lawrence for slowing and diverting traffic include speed bumps and raised medians, such as the one in place at Sixth Street and Schwarz Road, but that other measures could be used. She said that designers would look at what makes sense for Lawrence and the particular roads to determine what measures would be used to create the bike boulevards.

In addition to the bike boulevards, the Transportation Commission is recommending that funding — which also includes federal grants — be used for the addition of new sidewalk ramps, compliant with the Americans with Disabilities Act, and to fill various sidewalk gaps. The Transportation Commission used a new prioritization policy to help make its recommendations, which takes into account factors such as safety, housing density and proximity to priority destinations such as schools, grocery stores and transit stops.

“It gives us an opportunity to rank projects according to what might make the most difference for bicyclists, pedestrians and people with wheelchairs,” Paden said.