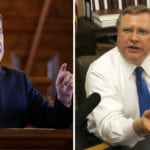 Hutton made the announcement at a campaign event in Wichita with Colyer and Lt. Gov. Tracey Mann, saying the Republican primary is now effectively a two-person race.

“If you are a Republican in Kansas, your nominee for Governor will either be Jeff Colyer or (Secretary of State) Kris Kobach,” Hutton said in a statement released by the Colyer campaign. “Gov. Colyer’s leadership has solidified that choice for me.”

Hutton, a former Republican House member from Wichita, was known in the Legislature as a fiscal conservative. But he chose not to run for a third term in 2016 after publicly breaking with then-Gov. Sam Brownback and calling for the repeal of Brownback’s tax policies.

Colyer, who had been Brownback’s lieutenant governor, inherited the governor’s office in January when Brownback resigned to accept a diplomatic post in the Trump administration.

Hutton returned to politics in August 2017 by launching his campaign for governor, running as a centrist who vowed to balance tax policies with adequate funding for public schools.

After only about six months in the race, however, Hutton officially suspended his campaign on March 9.

“Mark Hutton is a man of tremendous honor and integrity,” Colyer said in a statement. “Tracey and I are honored to accept Mark’s endorsement and we look forward to his advice, counsel and support throughout this campaign.”

Hutton was the third major candidate to drop out of the race. Former Rep. Ed O’Malley, of Wichita, and Wichita businessman Willis “Wink” Hartman also withdrew from the race in February. Hartman then signed on to become Kobach’s running mate.