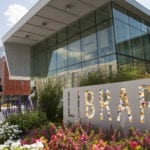 Although the number of people visiting the Lawrence Public Library has increased significantly in recent years, more of those visitors may not be coming for the books.

The library’s $19 million renovation and expansion added more study rooms, meeting spaces and even a recording studio to the building, 707 Vermont St. And since 2012, the last year the library operated at full capacity before the renovation, the number of annual visitors has increased by about 30 percent, according to data from Kansas State Library survey. In that same time span, though, the number of checkouts, both physical and digital, has fallen by about 12 percent.

“To me, the ways that you can consume information have expanded and transformed so dramatically from what a traditional library was,” Allen said. “I don’t really care where the inspiration comes from, and I don’t think singularly about any particular mission. To me, it’s all of a piece.”

Programming has long been a piece of what the library does, and both children’s and adult programming continue to grow. Since 2012, the library has added 85 programs, according to the data. In that same time span, overall program attendance has increased by 16 percent.

An increased emphasis on programming may be part of a national trend for libraries. According to the Pew Research Center, a large majority of people surveyed said that libraries should have programs to teach digital skills, and many said they hope libraries provide comfortable reading and working spaces. At the same time, checkout of printed books is still by far the most popular activity at libraries, with 64 percent of library users ages 16 and older having checked out a book in the last year, according to the survey.

Includes both physical and digital checkout

For Allen, books still define the library. Allen said that even as he sees the library as a place to meet up, work creatively or attend events, providing physical and digital books and other material is still the library’s “bread and butter.”

“If the library just had programs and a place to hang out, it would be a radically different place,” Allen said. “Our brand is still the book, and it’s clear by the amount of people who come in and check out things.”

Allen said the library continues efforts to increase checkouts. He said the library has undertaken some new strategies to make checking out books easier, which he thinks are making a difference in the trends. Between 2016 and 2017, for example, overall checkouts increased by about 1 percent despite double-digit drops in DVD and CD checkouts — a trend Allen attributes to the popularity of streaming services such as Netflix, Spotify and YouTube. Considering that, Allen said he thinks even relatively flat checkout numbers are encouraging.

“I would say I’m very encouraged we’re holding steady when we’re having these massive decreases in our DVD checkout and our music CD checkout especially,” Allen said.

Allen said efforts to increase book checkouts include creating displays of popular adult books in the children’s section to make browsing easier for parents of young children and new ways of displaying books. He said staff have hand-picked books for smaller displays, covers facing out, that he likened to the candy and magazine displays placed at grocery store checkouts.

The library’s 2017 report, which lists checkout, visitor and other stats for the year, was provided to the Lawrence City Commission at its most recent meeting.