Gov. Jeff Colyer on Friday officially nominated those areas, along with 72 other low-income neighborhoods in Kansas, as “opportunity zones” under the federal Tax Cuts and Jobs Act of 2017, the overhaul of federal tax law that Congress passed in December.

The two areas of Lawrence include a large portion of East Lawrence, including the east side of the downtown area, the Warehouse Arts District and two of the city’s business parks; and the University of Kansas campus, including the west campus, which KU officials have identified in their master plan as the site of a future research partnership zone. 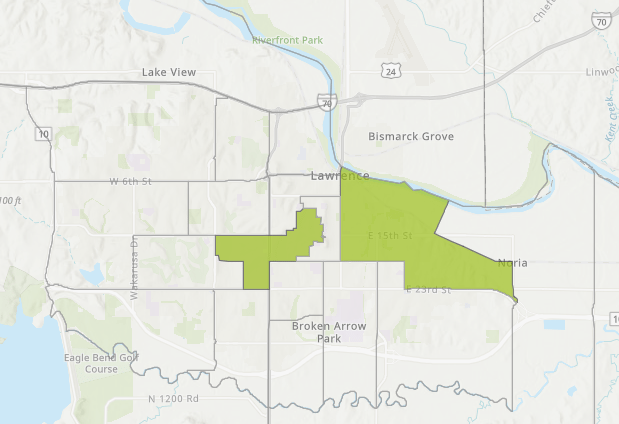 The two areas of Lawrence being nominated as opportunity zones under the new federal tax law include much of East Lawrence and the University of Kansas campus, including the west campus.

Under the federal program, according to the Kansas Department of Commerce, people can receive favorable tax treatment if they invest their unrealized capital gains into qualified “opportunity funds” that are dedicated to investing in real estate or business projects in opportunity zones.

Those investors can defer the taxes they would owe on those profits and even see a reduction in tax liability if they hold that investment in the fund for at least five years.

Investors can receive even more tax incentives if they reinvest their capital gains into another qualified opportunity zone investment. Additional incentives are available if they keep the investment in those funds for seven or 10 years.

Lawrence Assistant City Manager Diane Stoddard said in a phone interview Friday that the city was still unsure how big of an impact the Opportunity Zone designation would have on East Lawrence, but was optimistic that the program would help attract new investment.

“We do know that it creates an important investment opportunity in the future. With East Lawrence, the governor’s office was particularly interested in tracts where we have projects pending,” she said. “And of course we have the (downtown) grocery store project that is being proposed. And there is discussion about additional investment in the warehouse arts area. And of course we have the project that is underway and some expansion that’s happening in Lawrence VenturePark and in East Hills Business Park. All of those areas are part of that East Lawrence census tract that has been designated.”

KU officials were not immediately available to comment on their plans for a research partnership zone.

The governor’s office said it used a 30-day extension beyond the original March 21 deadline for submitting nominations so the administration could work with local leaders to finalize the specific tracts to be nominated.

The nominations are still subject to approval by the U.S. Treasury Department.