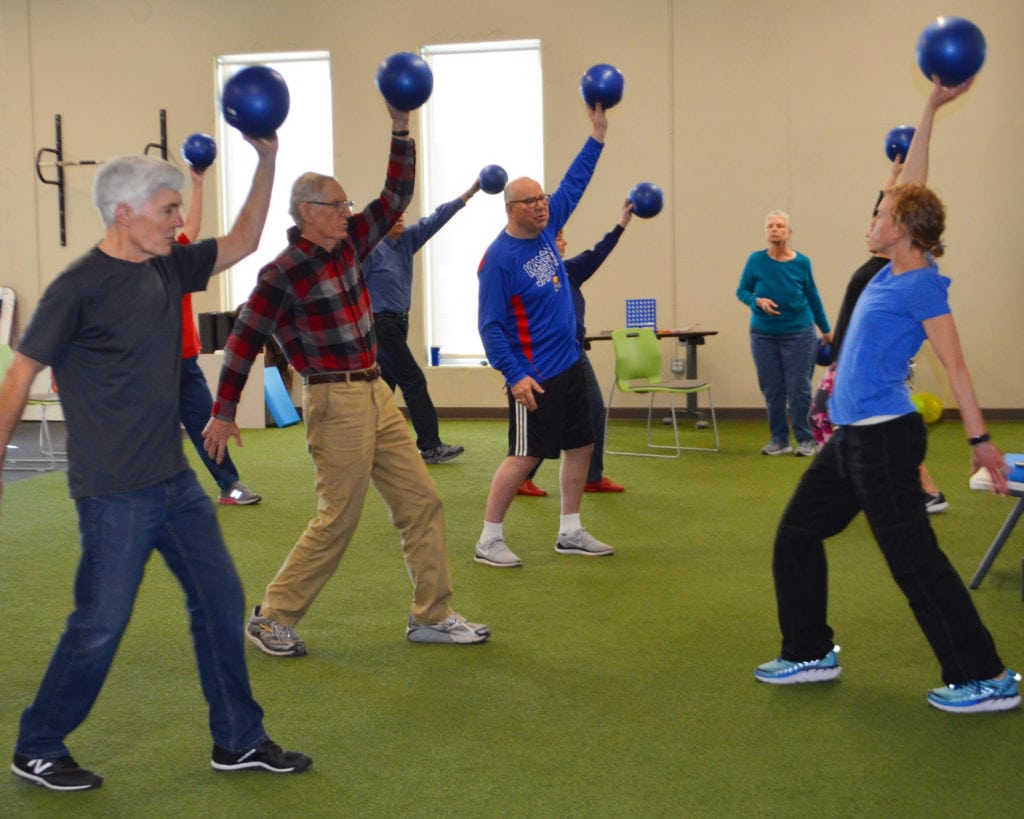 Early one morning in 1966, people from across the community gathered on the dirt floor of Allen Fieldhouse — not for a basketball game, but for an exercise class. This exercise class was led by the University of Kansas’ newly hired exercise science professor, Wayne Osness.

For more than 50 years, members of the Lawrence community who are interested in exercise programs have looked to Osness, 84, the former chair who now is professor emeritus in the department of health, sport and exercise sciences.

“Everywhere we go, folks come up to us and say, ‘Wayne, I’m still walking because you got me moving back in 1966,'” said Osness’ wife, Donna.

“It’s really a downer for people who have been active and now someone says, ‘You’ve got Parkinson’s,'” said Wayne, who chaired and served on the executive board of the U.S. Olympic Committee and also chaired the National Olympic Committee’s Education Board. “You start doing a little reading and you realize it’s degenerative — just a matter of time — and the question is: ‘How long is it going to take me?'”

Although there’s no cure for Parkinson’s, research shows exercise can ease and slow the progression of symptoms even more than medicine. However, because most people are only prescribed a few weeks of physical therapy shortly after their diagnosis, making sure people keep up with exercise after they complete therapy is difficult. 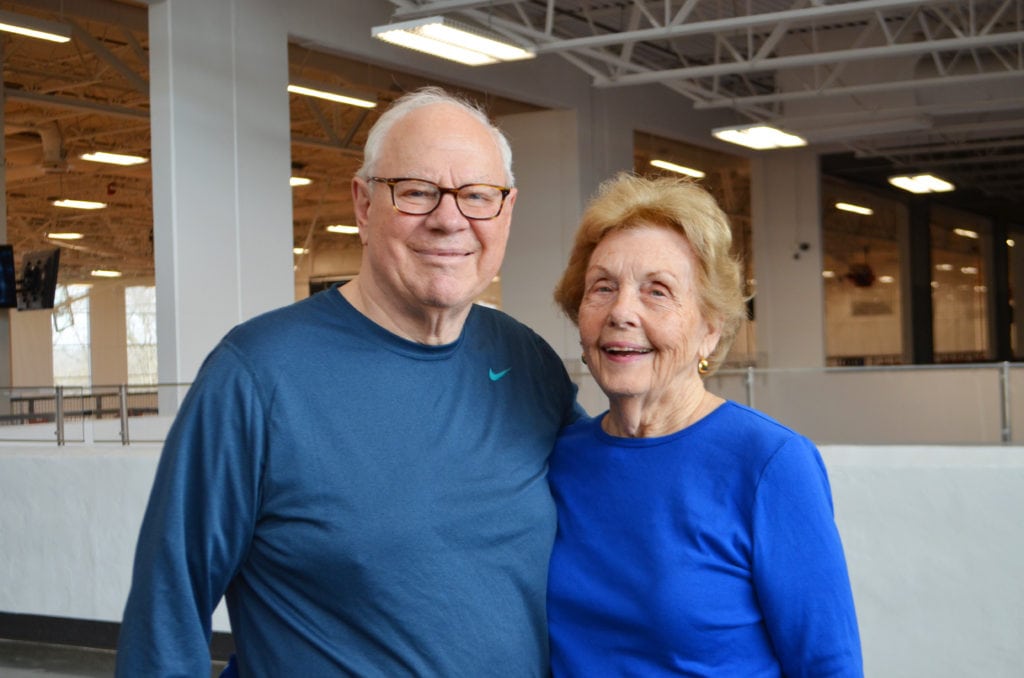 Wayne and Donna Osness have been instrumental in Lawrence Memorial Hospital's development of regular exercise classes for people with Parkinson’s disease. Wayne, who has Parkinson’s, is a professor emeritus for the KU health, sport and exercise science department.

“People don’t want to go to the gym, so they just stay home and get progressively worse,” said Donna, whose varied career included working as a registered nurse before holding various administrative roles in the Shawnee Mission and Lawrence school districts until she retired in 2000.

Last May, Donna and Wayne set out, determined to solve this problem. They met with Jaye Cole, director of Lawrence Memorial Hospital Therapy Services, about creating weekly exercise classes designed for people with Parkinson’s disease. They wanted the classes to begin by September.

“The longer we wait, the more people will be in trouble,” Donna, a former member of the LMH Board of Trustees, recalled telling Cole.

“I’ll see a patient for two months for Parkinson’s. They will get better, and then they’ll think they’re done,” Craig said. “Now, I get to keep track of them in a certain sense.”

• Two sessions of each class will be offered this summer. The first session runs May 8 through June 28, and the second will be July 10 through August 30. The cost for each class is $65 per session.

• Plans call for increasing the number of classes next fall.

The classes run back-to-back on Tuesday and Thursday mornings, beginning at 9:30 a.m. at Sports Pavilion Lawrence. Twist and Shout focuses on seated exercises; Rhythm and Moves adds an obstacle and agility component. During a recent class, participants did boxing-type exercises and later moved to the floor for stretches.

The Osnesses said it has been rewarding to see the progress among participants.

“We’ve watched people who had difficulty lifting their legs up off the floor and now Suzie has them marching,” said Donna, who attends both classes with Wayne.

When asked how they got so many people to enroll, Donna replied, “Knowing people helps.” The Osnesses have used their connections throughout the community to help promote and increase enrollment in the classes. Many members of the class are members of the Lawrence Parkinson’s Support Group, as are Donna and Wayne.

Wayne’s connections with the department of health, sport and exercise sciences at KU helped recruit assistants for the class. Joseph Weir, department chair, said the Osnesses reached out to him early in the fall looking for student volunteers to assist participants during classes.

“A lot of the participants just need somebody there to give them some support when they’re exercising,” Donna said.

Weir spread the word to exercise science students. Craig, one of Wayne’s students when she attended KU, said the student volunteers have been very helpful, and they are realizing how much fun it is to work with older people.

“I think this is a good example of the community, the hospital and the university working together for something that is very important for a lot of people,” Wayne said.

In the future, the Osnesses hope to get more trainers, offer more classes and move the sessions to a dedicated location with more storage space and equipment. They are also working with LMH Endowment to find a way to assist people with the cost of the eight-week class sessions, which is $65. 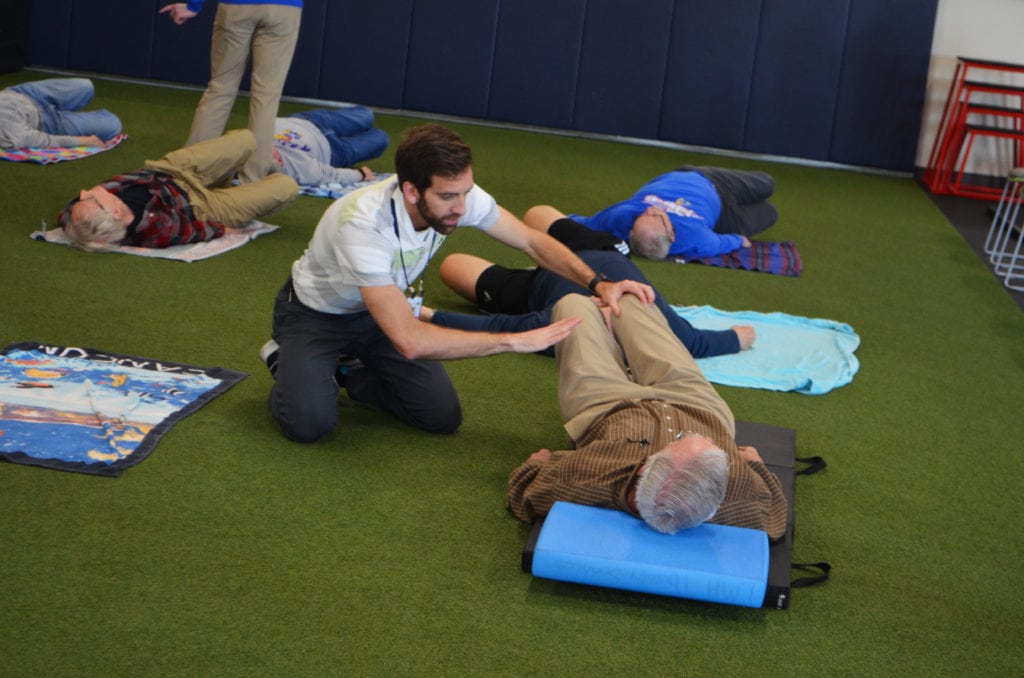 Phillip Palmer, an intern at LMH Therapy Services, assists Lew Phillips with stretches during a recent exercise class designed specifically for people with Parkinson’s disease. The classes are held twice a week at Sports Pavilion Lawrence.

“We don’t want anyone to be turned away because they can’t afford it,” Donna said.

Craig said the classes are growing, and she is seeing more referrals — meaning space is becoming tighter. She added that there are plans for Trish Lemke, a speech language pathologist at Lawrence Memorial Hospital, to begin teaching vocalization classes specifically for people with Parkinson’s.

As the numbers continue to grow, Cole said, she is assessing interest in other therapies, including art or music classes.

“What I always love to see is where LMH is that partner in the community, and where we are looked to as the resource to be able to do these things for our community,” Cole said.

For Wayne, the classes have proven once again that exercise makes all the difference. He still gets around without much assistance — and he’s helped make sure others do the same.

Though Wayne no longer leads morning classes at Allen Fieldhouse, his role as a go-to exercise leader continues in classes taught by his former student.

About the Lawrence Parkinson’s Support Group

Lawrence Parkinson’s Support Group provides support, information and socialization for people with Parkinson’s and their caregivers. The group meets from 2 to 3 p.m. on the third Tuesday of every month at First Presbyterian Church, 2415 Clinton Parkway.

Linda Upstill, a retired grief counselor, initially got involved with the group as a facilitator for the caregiver group. She has since joined the board and said she believes it’s an important resource for people to learn how other people are coping.

“The more knowledge you have, the easier it is to live with the changes,” Upstill said.

Wayne and Donna Osness both attend the meetings, and they are on the board. Guest speakers give presentations, and the group usually has a turnout of more than 50 people, which Wayne called “an eye-opener.”

Upstill said new members are welcome, and people interested in getting involved can just show up to the next meeting.

— Mattie Carter is an intern in the Marketing and Communications Department at LMH, which is a major sponsor of Lawrence Journal-World’s Health section. She can be reached at Mattie.Carter@lmh.org.