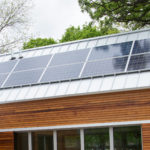 This file photo from May 2, 2016 shows a bank of solar panels atop a house project by the University of Kansas' Studio 804 architecture class, at 1200 Pennsylvania St.

Topeka ? Kansas electric customers who install solar panels or other kinds of self-generation devices may soon have to pay higher rates for electricity than other residential customers.

In a long-awaited and highly controversial ruling Thursday, the Kansas Corporation Commission said electric utilities may treat customers who generate their own power as a separate class and charge them higher rates in order to make sure they pay their fair share of the cost of maintaining the power grid. The ruling applies only to residential customers using what are called “distributed generation,” or DG systems, such as solar panels.

Officials at Westar Energy, which serves Lawrence and most of the state of Kansas, applauded the decision, saying it will ensure fairness in the way rates are levied. They also said they plan to file a new rate case early next year in which they will take advantage of the ruling, putting people with rooftop solar panels and other DG systems in a separate class of residential customers.

Westar spokeswoman Gina Penzig said about 80 percent of the utility’s costs are fixed costs related to maintaining power plants and the transmission grid. Only about 20 percent of its costs are determined by the amount of energy used.

A customer’s bill, however, is almost the exact opposite, she said, because only 10 to 20 percent of that bill reflects fixed costs, while the other 80 to 90 percent is based on usage.

“So then you take somebody who has private generation that helps offset their energy part of the time, and maybe even produces some excess that we store on the grid for them until later, and so their cost that they’re paying each month goes down, but our cost of serving them does not really change that much,” Penzig said.

But renewable energy advocates and a Lawrence-based company that installs solar panels blasted the KCC ruling, arguing that it was based on unverified data submitted by utility companies, not on any independent, third-party analysis, which they had requested.

“We think this decision has the potential to do significant short-term harm to the residential solar industry in Kansas,” Scott White, research and project analyst at Lawrence-based Cromwell Solar, said in an email statement. “It could make the pursuit of energy choice and energy independence less cost-effective and will force customers who want more renewable energy in the mix, to pay the much higher rates the utility charges for it, if the utilities are successful in getting what they seek.”

Dorothy Barnett, executive director of the Climate and Energy Project, a renewable energy advocacy group based in Hutchinson, said there have been similar rules enacted in some other states where rooftop solar generation is a much bigger trend, such as Arizona, California and Nevada.

“Kansas currently has about 700 systems across the whole state, so we have a ridiculously low amount of penetration from distributed systems,” she said. “Really what we’re doing is squashing a free market for people to have the opportunity to choose the kind of investment they want to make in their home.”

The case began with a 2015 rate filing by Westar in which the Topeka-based company sought to levy a separate tariff on customers who installed DG systems after Oct. 28, 2015, essentially charging them an additional fee for generating some of their own power.

Cromwell, CEP and others objected to that proposal, and the KCC eventually rejected it. But in July 2016, KCC opened what it called a “general investigation” docket, “to examine various issues surrounding rate structure for distributed generation customers.”

“The Commission stated its intent to have a thorough and thoughtful discussion of the appropriate rate structure for DG including the quantifiable costs and quantifiable benefits of DG,” the commission noted in its final order.

Based on that, White and Barnett said they asked for an independent third party to conduct a study to quantify the costs and benefits of DG power, but they said the commission declined and instead accepted the numbers submitted by Westar and other electric utilities.

That resulted in what the KCC termed a “non-unanimous Stipulation and Agreement” that formed the basis of Thursday’s order.

Barnett said the other parties in the case have 15 days from the date of the order to file an appeal. But she said none of the parties objecting to the rule had yet decided on what course they will take.