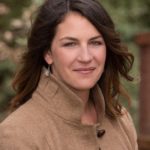 Maria Polonchek did not have an answer when her young son asked her, “Is God everywhere?”

“It’s shocking how early kids start asking about things like that,” Polonchek said.

As an atheist, Polonchek was not sure where to find help answering these types of questions. She searched for resources on secular parenting only to find that few books described what she was experiencing. So she wrote one.

Polonchek, a University of Kansas graduate, will hold a reading for her first book, “In Good Faith: Secular Parenting in a Religious World,” at 7 p.m. Friday at The Raven Book Store, 6 E. Seventh St.

What: Reading by author Maria Polonchek from her book, “In Good Faith: Secular Parenting in a Religious World”

She described “In Good Faith” as part memoir, part cultural exploration in her personal journey as a secular parent raising kids in a society surrounded by religious influences.

Polonchek said a secular lifestyle can lack a sense of community offered by religion. She grew up in an Evangelical household. Her family moved a lot when she was younger, but her mother would immediately find a church, giving the family an instant connection to the community.

Polonchek began doubting the beliefs of her religious upbringing during her teenage years. She said it was not until she came to the University of Kansas that she became comfortable expressing those thoughts in social interactions.

“It was really uncomfortable because I didn’t feel like people who thought they knew me actually knew me,” she said.

Polonchek said her book meets a need created by the changing religious demographics of American society.

In the 2014 Pew Research Center’s Religious Landscape Study, 36 percent of people ages 18-29 reported to be in the religious “none” category, signifying they do not belong to an organized faith.

Polonchek said not only are these millennials and late-Generation Xers leaving religion but they are also having kids, and this growing cohort of secular parents is often without many tools available to religious parents. She said parenting books, as well as books on morality and ethics, are often geared toward those with religious beliefs.

“There’s nothing out there for guidance on topics that religion has monopolized,” she said.

“It was sort of like a big Easter egg hunt of other disciplines to put this whole thing together,” she said.

Polonchek said she contacted child psychologists and experts on mixed-belief families to help create tips on how secular families can interact with mainstream religious traditions. She said the secular community would benefit from converting some religious traditions into their parenting.

“We don’t have to throw the baby out with the bathwater,” she said. “We can be more mindful about why we’re doing what we’re doing and then turn it into something that is meaningful to us.”

Polonchek said the biggest difference in her upbringing and her personal parenting style is the way information is presented.

“I grew up with information presented to me as really black and white,” she said. “It’s either right or wrong and I knew which side my mind needed to be on. There was no room for questioning.”

Polonchek said the book is not anti-religious. She said it’s important to allow children the opportunity to learn about religion without forcing it on them. She also worries that some secular parents are too quick to bash organized religion.

“The lack of understanding that some secular parents have in why religion is appealing to people in the first place really is a handicap to being able to guide their children to make their own decisions,” she said.