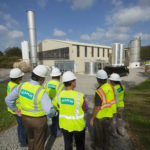 Tour attendees gather outside the new methane plant at the Hamm landfill north of Lawrence on Wednesday, Sept. 20, 2017. The plant takes methane emitted by decomposing trash and refines it into fuel.

The tons of trash buried in the Hamm landfill north of Lawrence are now a source of energy.

A new multimillion-dollar plant at the landfill has begun collecting the harmful greenhouse gas produced by rotting trash and turning it into fuel for natural-gas-powered vehicles.

At a ribbon-cutting ceremony Wednesday, Hamm officials said that the new plant joins other projects in recent years, including the recycling center and a new system for capping landfills, that lessen the landfill’s impact on the environment.

“All of these projects are a great story for the community,” said Charlie Sedlock, director of waste services at Hamm. “Added taxes, added jobs, added sustainability.”

The landfill serves about 500,000 Kansas residents, including the City of Lawrence. The new plant collects and processes methane gas, which is released as organic material as trash decomposes. Hamm partnered with Renewable Power Producers, a subsidiary of North Carolina-based Enerdyne, for the $20 million methane gas plant, which includes extraction wells, a gas-processing facility and a seven-mile gas pipeline.

Extraction wells collect the methane gas from the landfill, and the plant processes the gas and sends it into a pipeline for distribution throughout the region. The plant is expected to collect more than 4 million gallons of fuel annually, according to Chris Morley, CFO for Enerdyne.

Morley said the first purpose of the plant is to assist Hamm landfill in mitigating its methane emissions, but also to use those emissions to create a powerful source of energy.

“A number of municipalities and trucking fleets are converting their vehicles to natural gas vehicles, and our renewable natural gas is going to supply that,” Morley said.

Landfills are responsible for about 20 percent of methane emissions, according to the Environmental Protection Agency. Though methane makes up only 10 percent of greenhouse gas emissions, it is more harmful to the environment than carbon dioxide because it is more efficient at trapping radiation. Methane’s impact on climate change is more than 25 times greater than carbon dioxide over a 100-year period, according to the EPA.

Attendees of the ribbon-cutting ceremony were given tours of the new plant, where those involved with the project explained the multistep system for processing the gas before it is sent into the pipeline. Sedlock said the plant has about five employees and that about 100 methane collection wells have been installed.

“We have so much to be proud of,” Thellman said. “Unlike many, many, many communities in our nation, we have a landfill that is an absolute asset. Not just as a place to take waste, but as a place to remove dangerous gas from our hurting atmosphere and put it where it belongs.”

Thellman also thanked the landowners who cooperated with the construction of the seven-mile pipeline, which was needed to connect the plant to existing interstate pipeline networks.

“One weak link, one family that wasn’t willing to let the pipeline go through could have stopped this project,” Thellman said. “So we’re grateful to you for ultimately saying yes.”

State Rep. Tom Sloan, R-Lawrence, also spoke at the ceremony and said creating a cost-effective project for what is a relatively small landfill is a tremendous achievement. He commended Hamm and all those involved in the project, and said he is looking forward to what comes next.

“This is the future,” Sloan said.