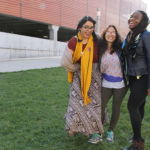 Marylin Hinojosa, Connie Fiorella-Fitzpatrick and Imani Wadud are pictured on the plaza of the Lawrence Public Library, 707 Vermont St. The women are part of a team that will help design a mural focusing on the stories of Lawrence women of color, which they hope to paint on the parking garage facing the plaza.

Lawrence’s history has many well-known characters, but not many are women and even fewer are women of color. A new community history and mural project hopes to change that.

The project team — made up of women of color from Lawrence and surrounding cities — has been awarded $11,000 in grants for the project. Connie Fiorella-Fitzpatrick, one of the project’s lead artists, said the idea stemmed from a discussion two years ago among a group of local female artists.

“We were thinking about women of color in Lawrence and the lack of representation, including in history, in the local museums,” Fiorella-Fitzpatrick said. “And we realized that we don’t need to be historians to record our histories.”

The project team will collect information about historical and present-day women of color in Lawrence, recording those stories in multiple formats from women in the community. The plan is to use that information to inspire a design for a public mural, proposed for the exterior wall of the parking garage that faces the Lawrence Public Library outdoor plaza.

Fiorella-Fitzpatrick said the team would work with various local organizations, including the NAACP, Haskell Indian Nations University and the Watkins Museum of History. The project will also have two “mentors”: Imani Wadud, a Ph.D. student in the Department of American Studies at the University of Kansas, and Nedra Bonds, a Kansas City artist, quilt-maker and activist.

In addition to its historic value, Marylin Hinojosa, the project’s other lead artist, said the project is meant to communicate a message of acceptance.

“We want to celebrate the women who have helped build this city into what it is today,” Hinojosa said. “And we want to let other women of color and other people in our community know that we are welcoming and acknowledging these women.”

The project team will begin the recording process Nov. 1, and invites members of the public to participate by sharing their stories or nominating a woman of color from the community to do so. The team will collect audio, video and photographs, and all the information will be uploaded to the project’s website. Once the mural design is approved, the public will be able to help paint it.

Wadud said the project would create an archive centered on women of color created by women of color. She said making the material available online and having the mural in a public space would bring the stories — and hopefully conversations about them — to the entire community.

“When we move from those oral histories and actually make the mural project, then we’re inviting the whole community to come out and to lay hands onto that public space,” Wadud said. “And to create something that has a long-lasting effect, and I think it is just as important to have that type of community engagement here.”

The team received two grants to help fund the project, totaling $11,000. The team was awarded $6,000 from the Rocket Grants program, a partnership between KU’s Spencer Museum of Art and the Charlotte Street Foundation. The project also received $5,000 from the Kansas Department of Commerce Creative Arts Industries Commission.

Members of the public who want to nominate someone for the Women of Color Mural project or participate themselves can find more information on the project’s website, wocmural.com, or email the team at wocmural.ks@gmail.com.

As with all local mural proposals, the Lawrence Arts Commission and the City Commission will review the mural’s design and plan. Fiorella-Fitzpatrick said the plan is to have the proposal ready in the spring and begin painting in May.