Seeing your doctor and lawyer at the same time; project at LMH serves about 200 in need 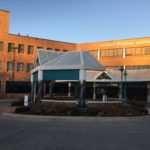 Sometimes a doctor just doesn’t have the power of persuasion that a lawyer does, and Juliann Morland DaVee now has 14 months of experience at Lawrence Memorial Hospital to prove it.

DaVee is the managing attorney for a partnership between LMH and the KU Law School that provides free legal service to low-income hospital patients who are having some type of issue with the law that is likely making it harder for them to be healthy.

A good example is a patient who was about to have her utilities disconnected. Her doctor knew a disconnection would worsen her medical condition, so the doctor called the utility company to apply for what was thought to be a relatively routine payment extension. The doctor, though, had no luck. The attorney fared much better.

“We had the extension in about 15 minutes,” DaVee told the LMH Board of Trustees at a meeting Wednesday morning.

The partnership between LMH and KU has been underway for over a year, and DaVee said the results have exceeded expectations. The program has received 198 referrals — a staff member of the hospital must recommend a patient for the service — and DaVee and her cadre of law students have dealt with about 250 different legal needs.

Those have included issues with wills and estates, guardianship, custody, protection from abuse orders, landlord issues and many others.

DaVee said she has sat with patients in the oncology department or while they’re receiving dialysis. She and the legal students have an office inside the hospital, which she said is one of the more important aspects of the program.

“We meet patients where they are,” she said. “They sometimes have trouble with transportation. This allows them to see their doctor and their lawyer at the same time.”

KU law students provide a lot of the assistance, and DaVee estimated that about 1,000 hours of volunteer legal service has been provided through the program.

“We’re doing a little bit of everything,” DaVee said. “I tell my students that I don’t know what will walk through the door, but I guarantee it will be a good learning experience.”

Russ Johnson, president and CEO of LMH, told the hospital board that the hospital wants to continue the program. He asked DaVee to start looking for trends in the types of cases the service is handling, which may lead the hospital to do more outreach with other community partners to prevent some of the legal issues from occurring in the first place.

DaVee said an early analysis shows there are certainly many reoccurring legal issues related to people with behavioral or mental health conditions. She also said the legal program has many conversations with the state’s Department for Children and Families.

In other news from the board meeting:

The board was told the recent Penny Jones Golf Tournament by LMH Endowment raised $110,000 for the hospital.

Leaders with the hospital’s emergency department met recently with new Lawrence Police Chief Gregory Burns. The hospital and police department discussed issues related to the recent downtown shooting that left three people dead and sent multiple victims to the LMH emergency room. As the Journal-World reported, a large crowd of family members of the victims and other bystanders quickly gathered outside the hospital after the early-morning Oct. 1 shooting. The police department did dispatch officers to the hospital in response to that crowd of 20 or more people, but the hospital and police discussed how that response could be quicker, if such a scenario arises again. Hospital board members were told Burns had good ideas on how to improve that situation.