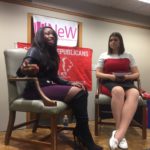 Antonia Okafor (left), a prominent gun rights activist and National Rifle Association spokeswoman, takes questions from moderator Victoria Snitsar (right), during an event Wednesday at the University of Kansas. The event, sponsored by KU's College Republicans and the Network of enlightened Women, discussed campus carry, conservative feminism and Okafor's role as the

She’s young, black and voted for Obama — twice. She’s also a self-described feminist who has become a proud advocate for the National Rifle Association, taking an active role in lobbying for campus carry laws in Texas.

“For me, my biggest point was to make sure that the face of the movement was seen,” Okafor, a graduate student at the University of Texas, told the crowd gathered Wednesday night on the University of Kansas campus.

More than 50 people filled the room on the fifth floor of the Kansas Union that evening to hear Okafor discuss conservative feminism, campus carry and her role in advocating for women to take up arms (literally, in this case) against sexual assault.

KU’s College Republicans and the Network of Enlightened Women, both conservative organizations, sponsored the event, which also received funding help from the Leadership Institute, a conservative nonprofit organization based in Washington, D.C.

Okafor, whose formerly left-leaning beliefs have since shifted toward conservatism and libertarianism, said she was tired of seeing women painted as victims in discussions of sexual assault.

She also doesn’t have trouble reconciling her identities as a feminist and as an advocate for campus carry. Okafor frequently pointed to one statistic frequently cited by gun rights activists — that 200,000 women every year deter attackers with defensive gun use.

“Are you familiar with the statistic that women are more likely to have weapons used against them than protect them?” Carpenter asked.

Okafor said she was, and acknowledged that statistics on gun violence aren’t always 100 percent reliable.

“That’s an issue,” she said, adding that “it depends on the group that’s spouting” the information.

Ultimately, though, she sees gun rights as an issue that transcends political parties, and she wants to see more people of varying beliefs — women especially — take part in ongoing discussions.

The figure that frequently comes up in discussions around on-campus rape is the estimate that 1 in 4 women will experience sexual assault at some point in their college careers. Okafor believes that number could go down if more young women carried guns.

“To be honest, who cares about the statistics?” she said. “If it’s just one person, one woman who is affected by sexual assault or assault in general, then me as a person (and) as an activist, wouldn’t it be up to me? Wouldn’t it be important that I at least do something to save at least one person from being assaulted in the future?”