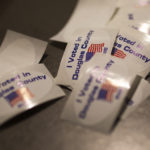 A collection of "I voted" stickers is pictured at the Douglas County Courthouse in this file photo from Nov. 3, 2016.

The mailers informed county voters there would be Nov. 7 elections for city officials and school board members and contained an application for an advance ballot. Shew said 4,600 of the advance ballot applications were returned, and those ballots were sent Wednesday to voters. In past city and school board elections, which were conducted in the spring, the clerk’s office had about 400 requests for applications, he said.

“We don’t generally do mailers for local elections, because we don’t know about the cost versus the turnout,” Shew said. “What this shows me is that it was money well spent. The results were far better than expected. Now, the next step is making sure people fill out those ballots and return them.”

Further pleasing Shew was the number of registered voters who hadn’t participated in past local elections but requested ballots this time around. More than half the advance ballot requests were from voters who had never before voted in city and school board elections.

“I’m thrilled we captured so many people who have never voted in local elections before,” he said. “The knowledge an election is occurring does drive participation.”

Advance ballots with a postmark of election day, Nov. 7, will be counted if they arrive at the clerk’s office by Friday, Nov. 10, Shew said. That election-day mailing option is new this year and was a result of him and other voting-rights advocates lobbying the Kansas Legislature for the change, he said. Also new is the option for voters to drop off advance ballots at any election-day polling site in the county, he said.

Although he is a supporter of the election-day mailing option, Shew encourages voters to mail their advance ballots to the clerk’s office as soon as possible.