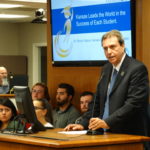 Kansas Education Commissioner Randy Watson presents the latest student performance data to the Kansas State Board of Education on Tuesday.

Topeka ? The Kansas State Department of Education released what officials called a “mixed bag” of numbers showing students generally scoring lower on statewide reading and math tests, but at the same time doing better on other measures of college and career readiness.

That was true across both major subjects, and across most grade levels, the report indicated.

The same trend also showed up in scores from the Lawrence school district, although not quite to the same extent.

At the same time, however, some other measures of academic performance showed Kansas students doing better, particularly at the high school level, in preparing themselves for college.

Education Commissioner Randy Watson said the number of students taking and passing Advance Placement courses is rising, particularly among Hispanic and African-American students. He also said more students are taking “dual credit” courses, meaning they earn both high school and college credit at the same time, and the total number of college credit hours being earned has increased.

“Academic preparation is a mixed bag,” he told the Kansas State Board of Education during its regular monthly meeting Tuesday. “There are some serious disappointments, and there are some areas we should be very proud of.”

The 2017 test scores are the third set of test scores since the state switched to a new testing system aligned with academic standards that the board adopted in 2010, standards which are now in the process of being replaced again.

It was also the first year that the state administered science exams under the new testing system, and those results were not encouraging either. Nearly two-thirds of Kansas students, 62 percent, scored in the lower two achievement categories, indicating that at best, the student has only a basic ability to understand the skills and knowledge involved in the subject, but is still not performing at grade level.

During the 10 years that a federal law known as No Child Left Behind was in place, states were required to show continuous improvement in test scores in order to qualify for federal funding, with the eventual goal of bringing all students up to the level of proficiency in both subjects. They were also used as the basis for state accreditation of individual school buildings.

That law has since been replaced, however, and the state is moving to a new accreditation system that looks at more than just test scores, factoring in things like students’ civic engagement, their social and emotional growth, high school graduation rates and post-secondary success rates.

Watson, however, said the state does not yet have reliable ways of measuring some of those factors. In the area of post-secondary success, he said, Kansas continues to lag far behind where it needs to be.

In 2015, the most recent year for which figures are available, only about 44 percent of students who were old enough to have graduated high school that year had gone on to college or a technical training program.

Watson said the state board’s goal is to get that figure closer to 70 or 75 percent, reflecting one study’s estimate of the number of jobs in Kansas that will require some level of post-secondary education by 2020.

Still, outside the halls of academia, the reading and math scores are what tend to matter most to lawmakers, and to the Kansas Supreme Court justices who will determine whether or not the amount of funding the Legislature provides public schools is constitutionally adequate.

In the most recent school finance lawsuit, justices continually pointed to the large number of students performing below grade level as indicators that current funding is not constitutionally adequate.

But State Board of Education Chairman Jim Porter, a Republican from Fredonia, said the board isn’t concerned about the legal or political fallout.

“Whatever is, is,” Porter said in an interview after the presentation. “Our goal is to make sure that we provide what is necessary for each student to be successful, and academic performance is one of them. The Supreme Court’s going to do what the Supreme Court does, and we will try to work with them, whatever their decision is.”