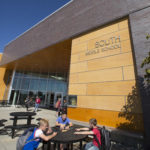 South Middle School students hang out on the patio outside the school after early release on Wednesday, Oct. 11, 2017.

The Lawrence school board agreed Monday to have a community committee make two recommendations for renaming South Middle School to honor Native Americans.

Board members voiced support for a proposal interim superintendent Anna Stubblefield presented, which would have a committee open to all interested community members recommend two names for the board to consider. One of the committee’s recommendations would honor a Native American, and the other would be a “non-person” name, Stubblefield said.

Cadue-Blackwood, a Kickapoo tribe member, wrote a June letter to the district that started consideration of the name change as a way to honor Native Americans and then-Haskell Institute’s donation of the land on which the school was built.

A survey of the South community shows a near-even split between those supporting the name change and those wanting to retain the current name. The district is inviting those opposed to a South name change to share their opinions through emails to individual board members or to all board members at schoolboard@usd497.org, Stubblefield said. But she emphasized that the committee would only consider name changes and would not engage in debate about retaining the South name.

Stubblefield said the committee also would be asked to indicate if South would be included in the recommendations. The four name changes the South Site Council developed, which were presented to the board Nov. 13, all included “south.” Those names were Kansa South, Arrowhead South, Billy Mills South and Jim Thorpe South.

Board president Shannon Kimball said board members Marcel Harmon, Vanessa Sanburn, Rick Ingram, Melissa Johnson, Jessica Beeson and Jill Fincher have voiced support for the name change. However, she said the board had not committed to approving either of the committee’s recommendations and could decide to retain the South name.

The board will consider the committee’s recommendations at its Dec. 11 meeting if they were presented in time, Kimball said. If not, they would be considered at a January board meeting, she said.

To limit the cost of a name change, South’s uniforms would be replaced with the normal rotational schedule and items such as stationery would be used until there was a need to reorder, Stubblefield said.

In other business, the board approved the 2018-2019 academic year calendar. The first day of school for first- through fifth-graders and a half-day orientation for sixth- and ninth-graders will be Aug. 15, 2018. All other students start the following day. The last day of classes before winter break will be Dec. 21 and students will return to school on Jan. 8, 2019. The last day of school will be May 23, 2019.