Hayden to resign as Lawrence superintendent, will stay with district in new role, pending board approval 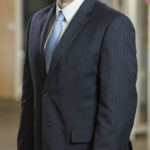 Kyle Hayden is resigning as the superintendent of Lawrence Public Schools after less than a year on the job, the district has announced.

He plans to stay with the district in the newly created role of chief operations officer, pending approval by the Lawrence school board.

The school board has scheduled a special meeting for 5:30 p.m. Wednesday to discuss appointing an interim superintendent. The board expects the position of superintendent to be filled by February 2018, according to a statement from the board.

Hayden’s resignation will be effective July 1, according to the district statement. He was appointed as the district’s superintendent in March 2016 and has served in that role since July 2016. He was hired at a salary of $205,000. The district has not disclosed what Hayden’s salary as COO would be, though district spokeswoman Julie Boyle said his new salary and contract would likely come to the school board for approval at Wednesday’s meeting.

The district has said the creation of the COO position will be “budget neutral.” It has indicated some vacant administrative positions will be eliminated, but it has not provided details to show how those cost savings will balance with the new expenses of the COO position.

In the release, Hayden said the decision to leave the superintendent’s position was family-based.

“This move is best for me, my wife, Katy, and our three children,” Hayden said. “I am appreciative of the staff and community support I received while serving as superintendent and am especially thankful for my leadership team, which has worked with me to move the district forward.”

Hayden did not take questions from reporters on Friday.

In the release, board president Marcel Harmon said Hayden had the support of the board to remain as superintendent.

In an interview Friday with the Journal-World, longtime school board member Vanessa Sanburn said the board first learned of Hayden’s resignation during an executive session Monday, May 8. Harmon and Shannon Kimball, the board’s vice president, had discussed the development with him previously, Sanburn said.

While she was a “little surprised” to hear the news Monday, Sanburn also said she understands Hayden’s motivations in transferring to a different role within the district.

“I do think Kyle is competent and capable in lots of areas, but I think his particular skill set is best suited to detail-oriented operations kind of work, and less suited to the public engagement kind of work,” Sanburn said. “And I think he knew that, and I think when the superintendency opened up, I think he thought that would allow him an opportunity to do that detail-oriented work while also doing community engagement work and leading our district. And honestly, I think he could have continued to do that, but I believe, as he clearly said, that his heart is in some of the other kinds of work.”

She also said Hayden has her support moving forward. His skills in management and operations, Sanburn said, will serve the district well as plans move forward on the $87 million bond improvements for Lawrence’s secondary schools.

In the role of chief operations officer, Hayden would manage all aspects of the bond construction projects, which voters overwhelmingly approved earlier this month. According to the release, Hayden will work with building staff and parent design teams and district design and construction teams to implement the bond projects. Before he became superintendent, Hayden served a similar role for the district as part of the 2013 bond issue.

In addition to management of the bond issue, Hayden will oversee the facilities and operations department, capital improvements planning, planning related to enrollment projections, building capacities, school boundaries and other issues.

Hayden’s new role would in many ways resemble his former role as assistant superintendent of business and operations — and also that of Tony Barron, the district’s current executive director of facilities and operations. But school board member Jill Fincher said Hayden’s shift to chief operations officer wouldn’t affect Barron’s position within the district.

She said the move might even offer some relief for Barron, whom she said had taken on extra responsibilities under Hayden in the last six months.

“Tony’s plate is full, without these upcoming projects. Tony really is at capacity doing what he’s doing,” Fincher said, later adding, “It’s been a tough year. That being said, I think Kyle was doing a great job. I just think he felt it wasn’t the best fit for him.”

During his short tenure as superintendent, the largest project undertaken by the district was the recently approved $87 million bond issue, which is intended to revamp Lawrence High School, plus make improvements to Free State High School and the district’s four middle schools. The bond issue won approval on May 2 with about 75 percent of the vote.

The district, however, has had some tumultuous moments during the last year. The school board and administration received large amounts of public criticism for how they handled a controversial resignation of a teacher at South Middle School. The teacher had been accused of making racist comments to his class. The board accepted the teacher’s resignation but sought to conceal the identity of the teacher and also sought to keep private that the district had entered into a settlement agreement with the teacher.

The district also has faced criticism that it has not done enough to promote equity in the school district.

In an interview with the Journal-World on Friday, school board member Rick Ingram said he recognizes how Hayden’s resignation might appear “sudden” to many in the community, “because I don’t think anyone outside of a few people saw this coming.” Ingram also said he acknowledges the speculation that may surround Hayden’s stepping down from his superintendent role.

But, Ingram maintains of the news, “what it looks like on the surface is what it really is.”

“It wasn’t that he was forced out. It wasn’t a way to be fired and save face,” said Ingram, who said he would have supported Hayden had he remained as superintendent. “This was a position that his heart was really in, the position he’s going back to. People will speculate about that, but that’s really just the case.”

• Expanded the concept of personalized learning in the district.

• Addressed technology issue for students with an iPad program at middle schools and a MacBook program at high schools.

• Completed a transition plan for a new Facilities and Operation Department and warehouse facility.

• Provided Beyond Diversity training to an additional 313 staff members, including all new teachers, and designed a plan to provide professional learning on culturally relevant teaching.

“I feel fortunate to have been able to contribute to significant facility improvements for all of the elementary schools and to have played a leadership role in gaining the community’s investment in a plan to upgrade all of the secondary schools,” Hayden said in the release.

Harmon and Kimball, the school board’s respective president and vice president, both thanked Hayden in the news release for his service to the district.

“As a first?time board president this year, I’ve benefited from his counsel and steady leadership,” Harmon said. “I’m grateful that our community will continue to benefit from his experience with facilities, bond implementation and planning, his leadership skills, and his passion for equitable education.”

And the several school board members the Journal-World interviewed on Friday each expressed support for Hayden in his decision, while also saying they felt he had performed admirably as superintendent.

“As much as we’re shocked about his leaving the superintendent position, we’re glad he’s staying on,” said board member Jessica Beeson. “He’s done a lot of shifting around of positions and job duties, so he’s really set it up for the next superintendent to be really successful, with a strong team.”

Hayden’s inaugural year as superintendent came at a “tough time for public education,” Vanessa Sanburn said, “and a tough time for government in general.” The tumultuous political landscape, both in Kansas and on a national level, she said, “creates an environment that is just ripe for conflicts and problems.” Hayden had a difficult job at hand, she added, and, in her opinion, he performed it well.

Though she and other board members had only begun to process the news of Hayden’s transfer this week, Sanburn was able to offer some thoughts on what the school board might be looking for in his replacement.

“We need someone who possesses excellent communication skills, someone who’s a good listener,” Sanburn said.

“This has been a challenging year. It would have been a challenging year for even the wisest, most seasoned superintendent in the universe,” she added. “I think that having someone with skills and strength in community relationship building, with an interest and a heart in that kind of thing, is certainly something we’re going to be looking for.”

The board at its special meeting on Wednesday will meet with a representative of the Kansas Association of School Boards for guidance on the process of appointing an interim superintendent this summer.

The district’s news release said the board will begin the superintendent search in the fall, and plans to name the next superintendent no later than February 2018.