Second-round clash pits good friends, great coaches against each other

KU's Self, Michigan State's Izzo to meet for 13th time 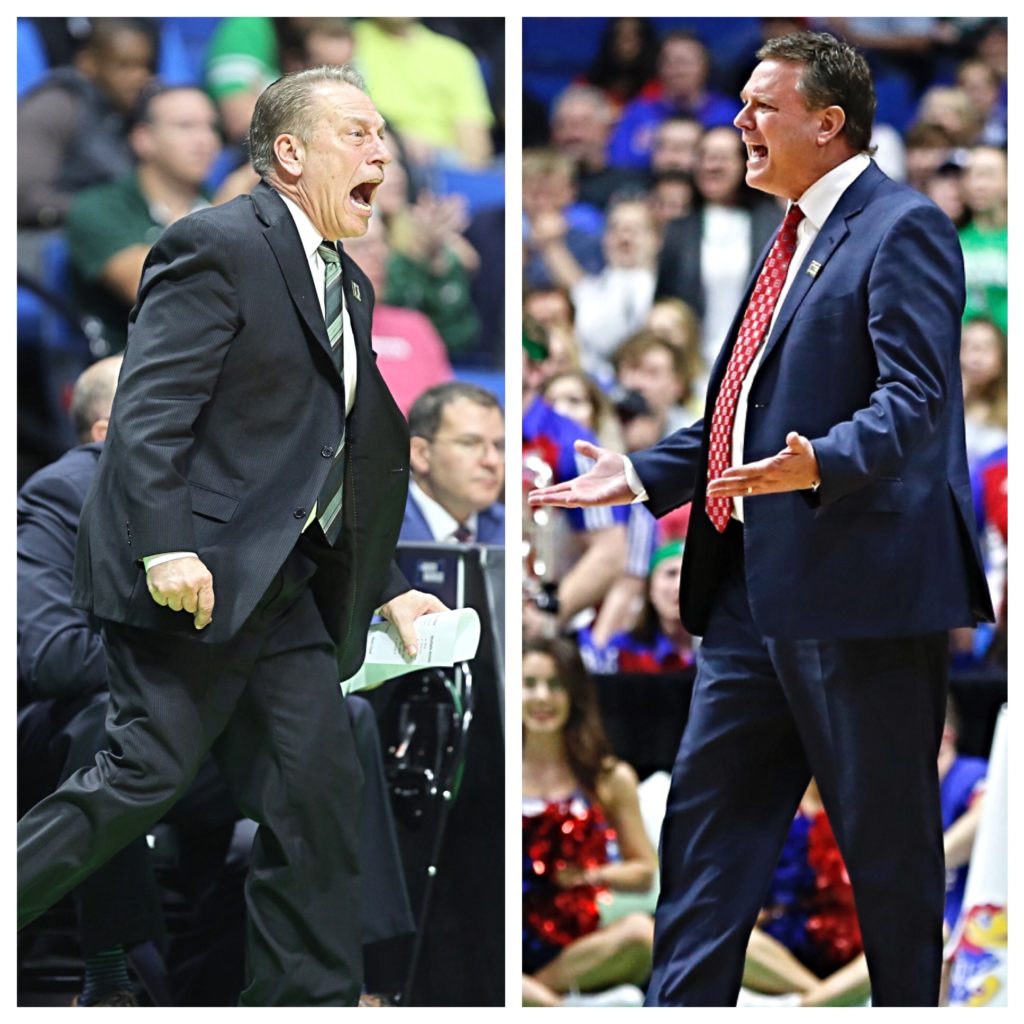 KU coach Bill Self, right, will face off against longtime friend and foe Tom Izzo, left, for the 13th time in his career Sunday, March 19, 2017, during the Jayhawks' second-round NCAA Tournament clash with Michigan State in Tulsa, Okla.

Tulsa, Okla. ? They have more than 1,100 wins between them and are regarded as two of the finest coaches in college basketball history. But the one thing that Kansas coach Bill Self and Michigan State coach Tom Izzo have that might mean the most is a genuine friendship.

Friday night, after his ninth-seeded Spartans knocked off Miami to advance to Sunday’s second-round showdown with top-seeded Kansas, Izzo was asked about facing Kansas and referred, without hesitation, to Self as a friend. 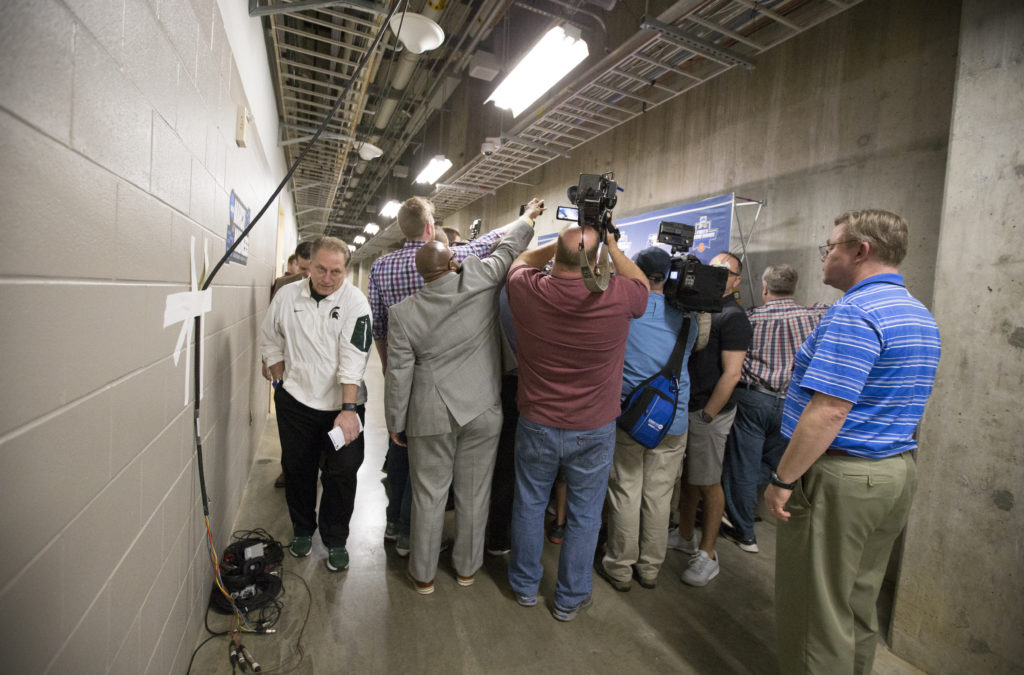 Michigan State head coach Tom Izzo squeezes past a gathering of media members as they interview Kansas head coach Bill Self outside the Kansas locker room on Saturday, March 18, 2017 at BOK Center in Tulsa, Okla.

Saturday, during preparations for Sunday’s 4:15 tip-off (CBS) at BOK Center, Self was asked how many members of college basketball’s coaching fraternity he would consider to be genuine friends and his answer was less than 10. Clearly, Izzo landed on that list.

“Tom and I developed a good relationship when we were in the (Big Ten) together and that’s remained,” said Self, who later recalled Izzo and Michigan State as “the standard” in the Big Ten during his three seasons at Illinois. “He’ll bounce things off of me when I’m frustrated and I’ll bounce things off of him when I am. He’s been a guy who’s been a great role model and a great influence on me.”

While Izzo owns the upper-hand in head-to-head match-ups between these two elite head coaches (7-5 all-time, 4-2 vs. Self at Kansas), the only victory that means anything to either one of them at this point is the one they’re both trying to get next.

To that end, several players in the Kansas locker room said they believed the Izzo-Self match-up could be just as important to Sunday’s game as any individual battle between players on the floor.

“It’s like a chess game,” said KU freshman Josh Jackson, again speaking and sounding wise beyond his years. “The only thing I kind of thought about was I’ve never seen Coach Izzo coach so many freshmen and have to play at the same time, but I have seen Coach Self do it before. It’s just gonna be interesting to see how that goes.”

Added junior guard Devonte’ Graham: “It’s two legendary coaches going at it, with two legendary programs, so both coaches will be locked in as well as the players.”

What exact influence their focus will have in this one remains to be seen. But whether you’re talking which coach is quickest to make key adjustments, who sticks with stubborn philosophies that work, timely substitutions or juggling foul trouble, the officiating and timeouts, Izzo and Self figure to have their stamp all over this one. 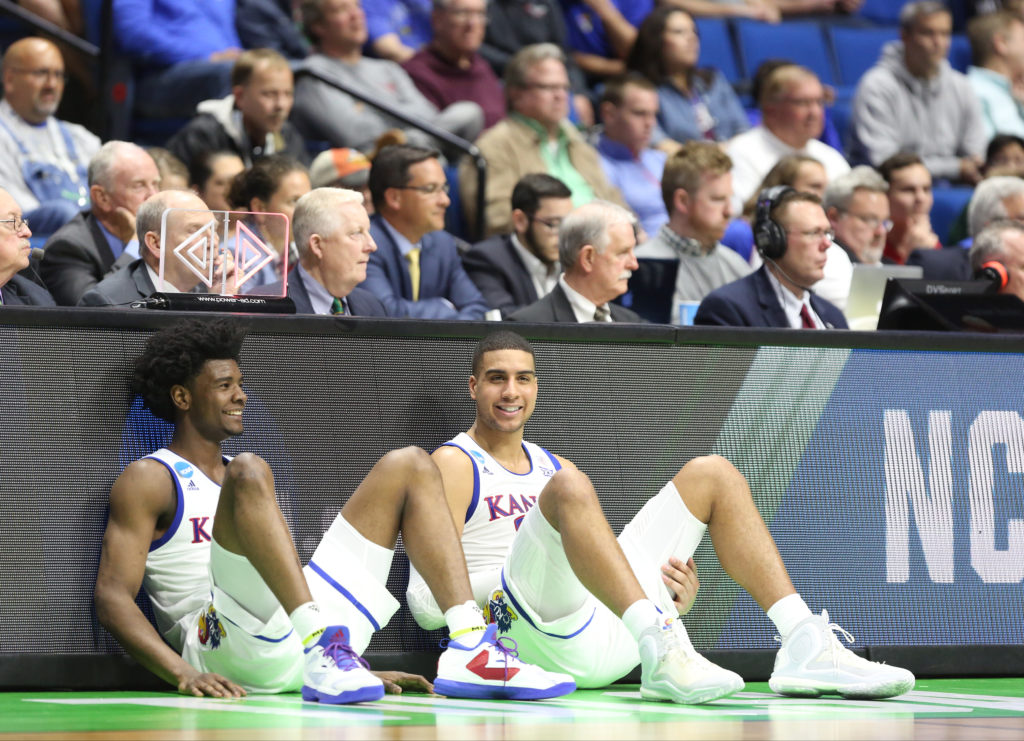 Kansas guard Josh Jackson, left, and Kansas forward Landen Lucas have a laugh while waiting to check in during the second half on Friday, March 17, 2017 at BOK Center in Tulsa, Oklahoma.

While both coaches probably would prefer to face someone else in this round — or any other round for that matter — it’s clear that both were looking forward to the challenge of testing one another against such a well-respected counterpart.

“Bill and I have been through a lot,” Izzo said. “We’ve played each other in the NCAA Tournament. We’ve played in the (Champions Classic) more than a couple times. We’ve been friends for a long time. So it’s been a long history. Great respect for what he’s done…. It’s amazing, amazing that they’ve won, what, 12, 13 Big 12 championships in a row. What all coaches aspire to do is not win big games, but have consistency and I don’t know of anybody who’s been more consistent than Bill.”

Whether that consistency and KU’s experience plays to the Jayhawks’ advantage in this match-up will depend on a lot of factors, from the pace and style of play to how the game is called and which team catches the most breaks.

Both sides know that. Both sides agree that defense, rebounding and transition are the three bullet-point items on each team’s white board.

And while all of that comes down to execution when the ball goes up and the game begins, the one thing that is not up for debate is one thing that Jackson, who was heavily recruited by both coaches, pointed out on Saturday inside the Kansas locker.

“They’re both great coaches,” Jackson said. “It’s something that I think we overlook a little bit. But, at the end of the day, if we just sit down and think about it, I think we would all agree that we’ve got a pretty darn good coach.” 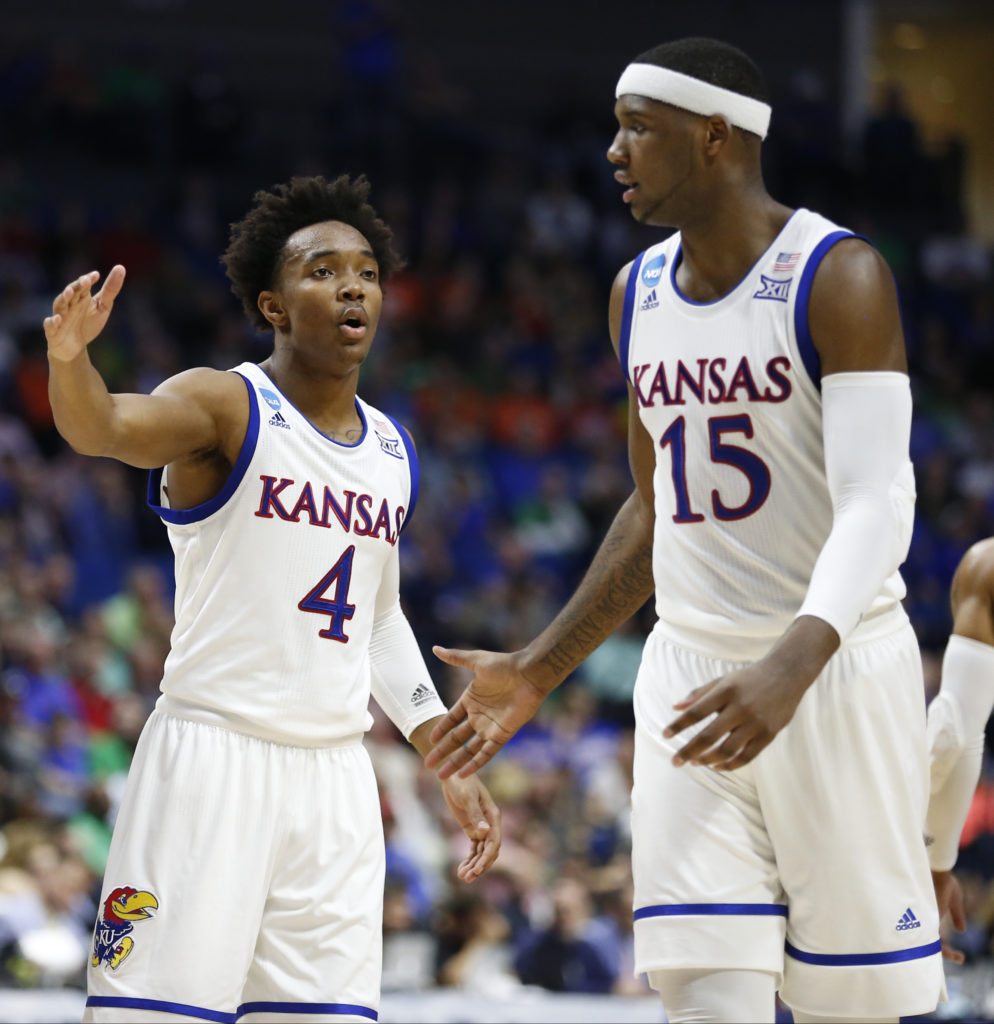 While many Jayhawks have said for a week that they like the idea of facing big-name opponents as often as possible throughout the tournament, the fact that this game is set and just hours away had both locker rooms buzzing with anticipation.

“I think that’s the case for most teams because when you’re playing another big-time program, especially at this time of year, everybody’s gonna come out and give it their best shot and 110 percent on each possession,” Graham said. “It’s Kansas vs. Michigan State. The coaches don’t gotta get us hyped for that. We ready.”

Added Lucas: “When it’s a team with a name like Michigan State, it just makes it even more special. I think, from the tip, it’s gonna feel like every possession is the most important one.

Sunday’s match-up will mark the third consecutive season that Kansas and Michigan State have faced each other, giving the Kansas veterans a good understanding of the style and way the Spartans play.

While Self said this year’s specific scouting report and attention to MSU’s personnel will mean much more in this one, the KU coach said the Jayhawks’ familiarity with their next opponent can’t hurt.

“I think it helps as far as the bullet points,” Self said. “‘OK, this is what we have to do to be successful,’ and things like that. I don’t think guys remember actions that they ran, but they’ll remember that they kicked our butt on the glass or they’ll remember our transition defense was poor because we’ll show ’em that.”

When the opening lines came out in Las Vegas, Kansas opened as an 8-point favorite against Michigan State and the Spartans were just fine with that.

“I think we play better as the underdog,” MSU freshman Miles Bridges said Saturday. “It just gives us more fuel to our fire, we play with more intensity, more energy and we’re not satisfied with anything.”

While point spreads and other external factors don’t have any bearing on games elsewhere, the Spartans, along with several members of the media, watched the end of Wisconsin’s upset of No. 1 overall seed Villanova in their locker room and, later, fellow-Big Ten brother Northwestern, nearly knocked off No. 1 Gonzaga.

“It’s great to see that,” said MSU freshman Joshua Langford, whose team went 2-0 against those two teams this season. “That’s the NCAA Tournament for you. You definitely don’t know what could happen.”

A little more than 10 minutes before taking the podium to talk with the media on Saturday afternoon, Self learned that his good friend and the head coach at his alma mater had chosen to leave Oklahoma State to take over at Illinois.

“It shocks me,” Self said. “I think it would shock most people, because, obviously, Brad was on a roll, I thought, in Stillwater, and a lot of great things have transpired in the short time he’s been there.”

Asked what this meant for Oklahoma State and the Big 12, Self expressed confidence in his alma mater.

“The program is in better shape than it was a year ago,” Self said. “So I’m sure they’re respond very favorably to this. But it is a shock. From the outside looking in, it looked to me like OSU and Brad fit very, very well.”