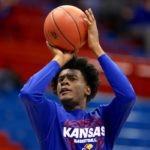 Kansas freshman wing Josh Jackson hoists up a shot prior to Saturday's game against Oklahoma State at Allen Fieldhouse.

Tulsa, Okla. ? For years, “Wake up!” followed by the player’s name or nickname has rolled off Kansas basketball coach Bill Self’s tongue probably as much as any other three-word combination.

Lately, “On your toes!” delivered with a softer tone from another spot on the bench has made its way onto the floor with regularity, except during the loss to TCU in a Big 12 tournament quarterfinal.

“Wake up!” and “On your toes!” can mean the same thing in some contexts, but not in this case.

Kurtis Townsend, the longest tenured assistant basketball coach in Kansas basketball history, is the one hollering “On your toes!”

And he only does so when Josh Jackson is at the free throw line.

“When he gets in the games, I don’t know if you notice this, when he does miss, he stands flat-footed and doesn’t get up on his toes,” said Townsend, in his 13th season as Self’s assistant. “So if you hear us yelling, ‘Hey, get on your toes!’ it’s because he doesn’t get up like that (demonstrates it in lobby of team hotel).”

So far, Jackson’s free-throw shooting has equated to Cindy Crawford’s mole, but he’s not far from solving the problem, according to Townsend, who has had a hand in Jackson’s vastly improved 3-point shooting.

“He’s so good in practice and it’s amazing that he’s that low of a percentage shooter,” Townsend said of Jackson, .559 from the line on the season.

So the coach asked the player for his opinion as to the source of the disparity.

“He said when he shoots them in practice he doesn’t even think about it,” Townsend said. “And then when he gets in the game, he’s kind of waiting for the ball to come to him and all this stuff is running through his head. So I think it’s all mental.”

It’s easier to shoot free throws in practice for reasons that range from shooting backgrounds to fatigue, to what’s at stake, so it’s reasonable to expect a player to shoot maybe as much as 10 percent better in practice, but Jackson’s gap is much greater than that, unusual for a player who performs consistently well in all other areas against tough competition in clutch situations.

“I really think he should be a 75-percent free-throw shooter,” Townsend said. “He’s got a really soft touch and we changed his stance a little bit. When he first got here, he shot it with all upper body, didn’t bend his knees at all. It’s way better and he shoots, I’m telling you, 80, 85 percent, in practice . . . but something happens in the games and it’s just mental, I think.”

Might a sports psychologist be able to lend advice?

“I don’t know if he would buy that,” Townsend said. “He’s just such a competitive guy. He would say, ‘No, no, I’m going to get better. I’ll make this better.'”

Everybody starts with the same NCAA tournament free-throw percentage, so the clean slate might help to clean whatever is holding him back. Stranger things have happened in March than if Jackson were to shoot 75 percent from the line from here to the end of his college career. After all, this is the same player who his first 18 games for Kansas made 8 of 38 3-pointers, and in his next 13 made 21 of 39.