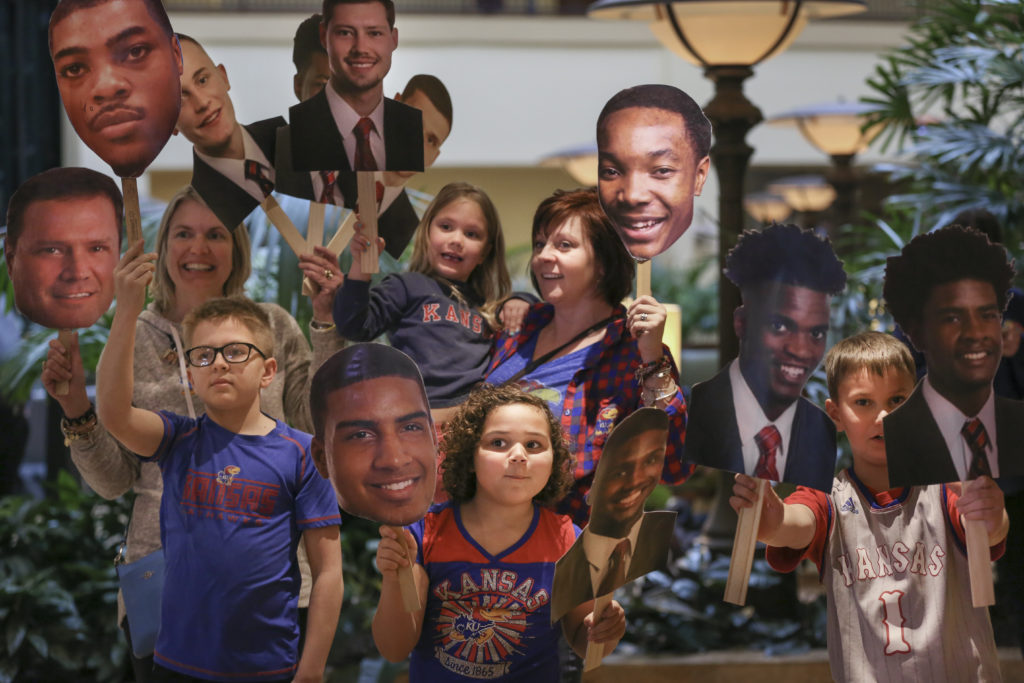 TULSA, OKLA. ? At 4:55 p.m. on a sunny and mild Wednesday afternoon in the heart of Oklahoma, two buses carrying the Kansas men’s basketball team and its travel party pulled up to the northeast entrance of the team hotel, 13 miles east of Downtown Tulsa, marking the official beginning of KU’s 2017 NCAA Tournament run.

One problem, though. As team managers unloaded bags, players and coaches filed into the hotel for check-in and a smattering of KU fans holding oversized faces of various Jayhawks cheered them on, top-seeded Kansas was without an opponent.

That, of course, would come later Wednesday night, when the Jayhawks (28-4) learned that UC Davis would be the first team up on what they hope will a long and memorable tournament adventure. 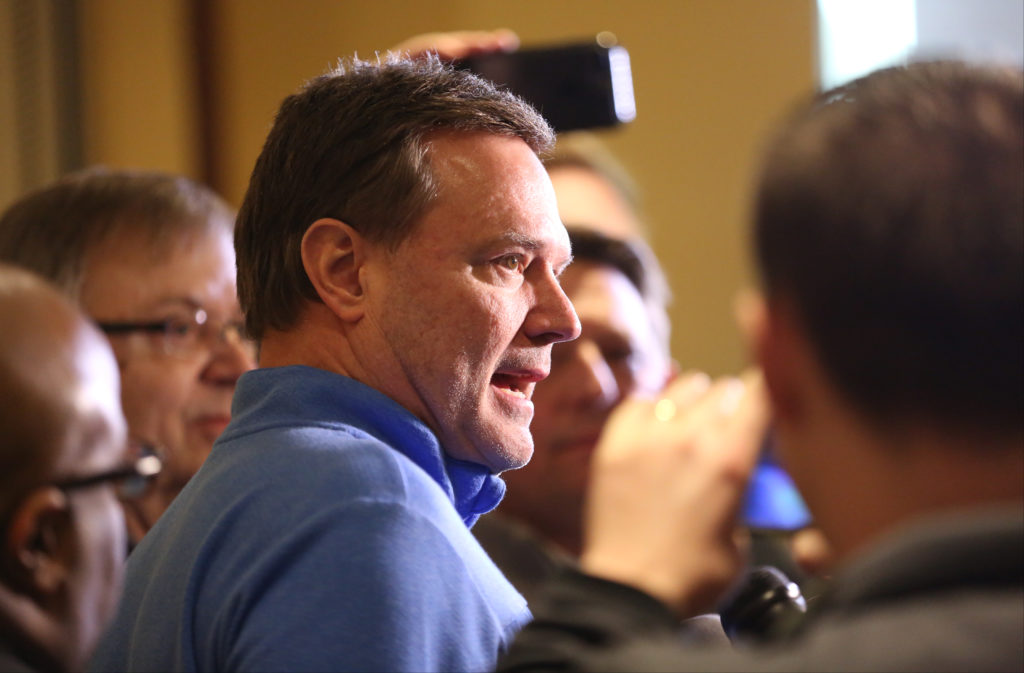 Kansas head coach Bill Self talks with media members upon the team's arrival at the Renaissance Hotel in Tulsa, Oklahoma on Wednesday, March 15, 2017.

Unlike past years, when the Jayhawks arrived at their destination knowing the identity of their first foe, Wednesday offered something unique and KU coach Bill Self and company were ready to handle it.

“We’re gonna watch the first half here and then, at the beginning of halftime we’re gonna go eat and we’ve got a hotel that’s got a big-screen TV in the room we’re eating in, so we’ll be able to watch it all,” said Self of Wednesday’s 67-63 win by UC Davis over North Carolina Central in Dayton, Ohio.

Wednesday’s watch party was not the Jayhawks’ first encounter with their two potential opponents, but it was the first time they were aware of what they were watching.

“They don’t know anything about either team so far,” Self said before Wednesday’s game tipped off. “I mean, you don’t want to overload ’em with that. We’ve practiced for both teams, but without them knowing which team. They’ll know more (Wednesday night) and they’ll be well-versed on ’em by (Thursday) morning.”

A couple of hours after UC Davis’ victory went final, the Jayhawks gathered back at the team hotel for a 10 p.m. scouting report meeting, which Self said likely would mean different things to differently players.

“Some of ’em will watch it as a basketball game and some of ’em will watch it with a scouting eye,” he predicted of KU’s viewing of the NCC-UCD game. “The freshmen will probably say, ‘Man, that’s a nice play,’ or, ‘He’s athletic.’ And Frank (Mason III will) say, ‘See how they scored? They run this action a lot.’ That kind of stuff.”

Regardless of what they learned by watching Wednesday’s game, or even how they watched it, Self said he believed his team was focused and ready to begin final preparations for Friday’s 5:50 p.m. tip-off at BOK Center.

Included in that is Self, who said knowing the identity of KU’s first-round opponent allowed him to deliver a stronger message than he had earlier in the week.

“I think it’s hard to come with, ‘Hey, this is what we’re gonna do, this, this and this,’ when you don’t even know who you’re playing yet,” he said. “The message is don’t waste any time, don’t waste the day, be responsible, disciplined.”

“We played pretty well in Tulsa last time,” Self recalled. “We didn’t play great against BU but played fairly well against Illinois, so hopefully it’ll be a repeat performance.”

Self said the extra time off that came after last week’s loss to TCU in the Big 12 tournament helped the Jayhawks recharge and he added that everybody arrived in Tulsa in good health and eager to get started.

“One game in seven days, that’s not enough, but I do think it could’ve been good for us,” Self said. “We practiced pretty hard this week. We haven’t looked great, but we’ve gone pretty hard so I know our guys will be ready to play.

“I think everybody’s gonna be excited and I think it’s important that our team is excited. The teams that we’ve had the most success with in the tournament were teams that were excited and had an edge, but still were mature enough to be loose about it. And I think that’s a fine line that we have to get to. Because I want our guys to play with freedom. And sometimes, when you get in a one-and-done situation, that doesn’t happen as easily. But I think we’ll be OK there.”

Although the meat of Self’s scouting report on KU’s first-round opponent was put in place late Wednesday night and will be finalized with two practices and more film work today, Self offered his earliest thoughts on the Aggies (23-12) shortly after KU arrived in Tulsa.

“Very disciplined,” Self said of UC Davis. “I mean, they can really guard. They can score, but they don’t play real fast…. But certainly (it will probably be) a game in which we have to create some pace, no matter who we’re playing.”

Asked how Wednesday’s trip from Lawrence to Tulsa went for him and his team, Self opened his eight-minute meeting with the media at the team hotel with a little humor.

“It was the most comfortable four-hour bus trip that I’ve ever been on, sitting within a seat that doesn’t lean back and looking straight up above you watching television,” Self laughed. “I was glad it was over. It was fine, though.”

“It’s a good sign that we’re close enough to bus,” Self added. “That’s always a positive.”

With Tulsa sitting just 220 miles south of KU’s campus, the expectation is that Kansas, as it does most years and in most places, will have the largest fan base on hand at this week’s first and second-round games at BOK Center to open the Midwest regional.

Self said the Jayhawks never take the support of their adoring fan base for granted and revealed that, this year, he thought the most die-hard Jayhawks had an added advantage.

“I think our Jayhawk fans will figure out a way to get tickets,” Self said. “The one thing we’ve had an advantage in over everybody else, as far as fans, is, for three weeks, our fans have known we were gonna play in Tulsa. They’ve known that. So if we don’t have tickets then we haven’t been very great. Obviously, a lot of people wait to the last minute, which, we understand that. But I do hope people make an effort to get down here because they’ve had a head start. SMU, Michigan State, UC Davis or North Carolina Central or Miami, they had no idea where they were gonna be.”